It’s really strange that I just classified as “oldies” some books that became available in digital format just a few short months ago. I guess it’s the nature of the digital age, the immediacy, and the ease of publishing that has changed my perspective. But the fact that these supplements where published some months ago doesn’t make them any less amazing.

These books where provided by the publisher for review and even if I took my sweet time to get to them I am always really flattered that publishers will submit their products for review. Thanks, that doesn’t mean I’ll pull my punches!

So without further ado, the reviews… 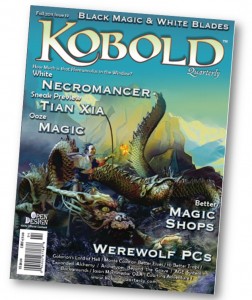 What about Kobold Quarterly #19?

Issue 20 of Kobold Quarterly just came out, and I plan to review it much faster than the previous issue, but the issue at hand (pun intended) is 19, the Fall issue. I’ve reviewed previous issues and the wonderful people at Open Design have made me a fan, with a mix of nostalgia for the old Dragon Magazine coupled with great new content for some of the most popular fantasy RPGs in the market right now, D&D, AGE and Pathfinder. So what’s good in this issue? Glad you asked!

Pathfinder goodness: The White Necromancer, a fully fleshed out non-evil necromancer option; Druid archetypes; an article on magic shops, and making them more than simple wholesale magic warehouses, giving them flair and turning them into role-playing opportunities; and death themed archetypes for Druids, Barbarians, Monks and Summoners. There is a preview of the new Paizo’s Dragon Empire and Dragon Empire themed Arch-Devil. Overall, great content for all Pathfinder fans!

Then there are the AGE articles. I love that they are supporting this system and adapting Midgard content for it, in this case ten backgrounds for the game. A system less article on court adventures, including the power players and adventure ideas is a great source of inspiration for role-playing. There is another system less article on traps; the winner of the Relics of Power is published in this issue; a solo adventure; Mont Cook’s balance free bonuses ideas, bonuses that don’t impact game balance, adaptable to any edition, was my favorite article of the issue.

There is just one D&D 4th edition article, with rules to play werewolf characters. It seems interesting enough, and I’m sure this will be popular. I was surprised that this was the only article written specifically for the system. True there are many excellent articles that can be adapted, but I was surprised. I guess they can only publish the articles submitted and wonder if this is a sign of the popularity of the games. Even if I don’t play the game, I know many D&D 4th edition fans that love the magazine and hope to see continued support for the game in future issues.

All the usual suspects are here, the cartoons, book reviews and Free City of Zobeck closing article. Overall I loved this issue; it was full of Pathfinder articles which makes me personally happy. But I know fans of other games read the magazine and I hope to see more balanced content in the future. If you love a system, be sure to check out their Writer’s Guidelines and try to get published. 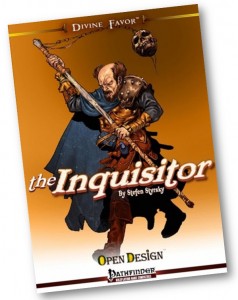 What about Divine Favor the Inquisitor?

Here is the final installment of the Divine Favor series; this time around it’s the Inquisitor’s turn. The cover is a little drab, just an Inquisitor in a battle pose, I am a fan of Christophe Swal’s art and I think using the same Inquisitor from the Advanced Feat cover was the right choice, but the art seems off and the ocher background left much to be desired.

Inside its 17 pages of content, with clear layout, the use of stock art, most of it appropriate, but there are a couple of odd choice, nothing that is terribly distracting. The new abilities and new inquisitions are refreshing and thread some interesting ground, expanding the possibilities of the class. There are some interesting archetypes, feats and spells. They all play well of one another and Stefen Styrsky provides a good closing to the series.

What about the Book of Drakes?

This is my favorite of the three books, and this is my favorite one. Drakes in Midgard are fascinating creatures, the idea of dragon-like creatures that are not as powerful and can appear in the game in very different roles than traditional dragons are an excellent option.

From the cover by Kieran Yanner, to the layout, to the interior art, this is a beautiful book to look at. And the writing is top notch too! Kudos to the design team… The ecology of the drake that opens the book is reminiscent of the old ecology articles of Dragon Magazine and a great introduction to the creature in Midgard. There are rules for drakes as companions, feats for them, class features, prestige classes, spells, and equipment, mundane and magical. I was NOT a fan of the rules for playing drakes, I think they are better allies or opponents that a playable option. The bestiary is great, providing drakes from CR 1 to CR 14, and rules for creating new drakes.

This is a great book that while officially a Midgard setting book, can be used in any Pathfinder game. The book is available in PDF and a print+PDF. I recommend the latter; this book is just too pretty not to have in print.

There you have it, three great books that have been out for a while now, but you can’t go wrong getting them. I hope you enjoy them!