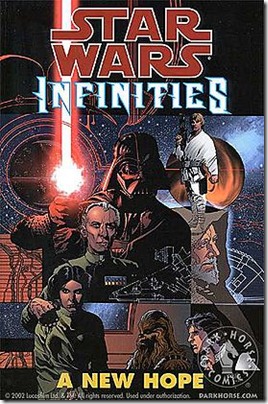 Roleplaying game settings based on an existing book, movie or computer game franchise can be either a boon or a curse. On the one hand you usually get a fully fleshed-out world which your players are already familiar with. When you play a Star Wars game for example, you don’t need to explain what a Jedi, a blaster or a snow speeder is. After explaining the game rules you can immediately start playing and the players already know how the world is supposed to work.

On the other hand, canon can get into the way. When you try to keep things in canon, it’s always Luke Skywalker who blows up the Death Star, Yoda dies in his hut on Dagobah and the Emperor dies at the hands of Darth Vader. The player characters can’t play a major role in these events if you don’t want to mess with the canon.

But why should you even care about canon? The Dark Horse comic series “Star Wars Infinities” effectively shows how you can mess with canon while still keep the tropes of the setting firmly intact.

In Star Wars Infinities Luke Skywalker fires two torpedoes at the Death Star but due to a technical malfunction they fail to destroy the Death Star. This changes the course of Star Wars history in significant ways. The other two Infinities graphic novels change events in “The Empire Strikes Back” and “Return of the Jedi” that lead to quite different stories compared to what were used to from the movies.

If Dark Horse comics can pull this off – even with George Lucas’ blessing, why can’t we? Especially when playing a game in a well-known setting like the Star Wars saga, it can be interesting to explore what could have happened when you change a few events. I can easily imagine a Star Wars campaign based on the events in one of the Star Wars Infinities books. Or perhaps it hasn’t been Luke Skywalker who destroyed the Death Star at the Battle of Yavin, but one of your players. The possibilities are endless – or shall we say “infinite”.

Of course this can be applied to other settings as well. How does the Eberron setting change if Cyre hasn’t been destroyed at the end of the Last War? As GM you’re in charge of what happens in the game world, so why not mess with the canon, the meta plot or even the history of the world you play in? I have to admit, even though I have run roleplaying games for over a decade, I still hesitate to mess with a settings canon. But the Star Wars Infinities comic books have shown me how changing things could make a campaign even more interesting for the players.