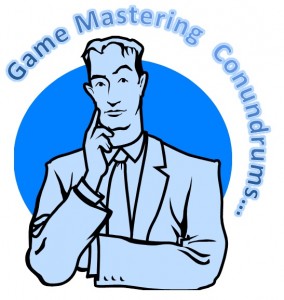 For those wondering why there was no post yesterday, the Stargazer is sick! Doesn’t seem to be anything life threatening (sorry guys we are not inheriting the blog just yet!). With our fearless leader sick it falls upon us minions… I mean other contributors, to pick up the slack. So here we go!

Recently I posted about my interest in running a Vampire the Masquerade game. I’m reading the 20th anniversary book and all sorts of idea are percolating in my head. One of them is how to bring all the characters together. Games such as Vampire where characters have so many built in conflicts it can be particularly difficult, but this consideration is important for any game. Unless all you adventures begin with “You are all together in a bar…”

For the Vampire game I have been considering various options:

Those are just two ideas, but by their very definition they will limit the options available for players from the get go. Be it for Vampire or many other games I feel some trepidation when I do this. I understand that limiting character options can establish the tone and feel of the campaign, and if this comes out from an open discussion and agreement between all parties, players and game master, it can be a great thing. But when it’s a unilateral decision it can be frustrating.

Mind you I have done it, and when I play fantasy, which is a genre I play so often and that we have played so much, placing limits doesn’t quiet bother me as much. The players have tried many options in fantasy games. And even then if the player has some really interesting concept that may stretch these limits I’ll consider it.

Let me explain my rationale. I am a firm believer that all parties in a game should have fun, and for many players making the character they envision is part of that fun. Playing just what you want, within the limits of the game, can be terribly exciting and satisfying. If as a GM I limit these options from the beginin, then I am truncating the fun even before the game begins. As a GM I should be able to account for different player styles, interest and character types.

And then there is the fact that when we get to play Vampire it will more than likely be a short mini-campaign, in a game I have not previously run, and which many players have not played. I think limiting their options may shortchange them from the Masquerade experience. So I’ll find a way to bring the characters together without limiting them rule wise. As a Storyteller that will be my responsibility.

How do you feel about limiting player options? How do you go about it? I’d love to know!

PS – I didn’t even notice that my previous post was number 200. Wow how time flies. Thank you all for reading!