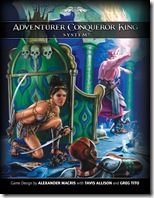 This morning I stumbled upon “Adventurer Conqueror King” on RPGNow. It’s a roleplaying game based on OD&D and using the OGL that has a focus on what I would call the “endgame”. The game comes with an integrated game economy that allows characters to dabble in trade, there are rules for building strongholds, and running kingdoms or guilds. But of course you can experience more classical adventures, too.

The game allows you to play one of twelve classes that can be easily customized by an optional proficiency system. All the basic classes like the fighter, mage, thief, cleric are included, but there are also more unique ones like the explorer or elven nightblade.

From what I’ve seen so far the game looks perfectly suited for epic sandbox campaigns where the players start out as simple adventurers but may end as kings of their own making.

The 274-paged PDF is well laid out and contains a lot of nice black and white artwork that fits the style of the game. If I just hadn’t started a new campaign, I definitely would give it a try.

The PDF sets you back $9.99 but also contains a $10 coupon on the purchase of the hardcover.