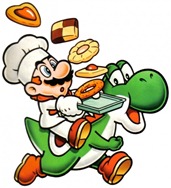 On February 13th I asked you to post your favorite gamer food recipes. Today I checked all the contest entries and picked the recipe I liked best. And the winner is Parker Emerson’s recipe for Baked French Toast with Laiel’s dark chocolate cake recipe and Crose87420’s spaghetti sauce as close seconds. Here’s Parker’s recipe:

I like to make baked french toast. Recipe first, explanation why second. (With regards to recipe, I’m going to assume some base level cooking or reasonable-strength Google-fu.)

RECIPE
(1) Make a brown sugar glaze. I use 1 cup brown sugar and a stick of butter over medium heat, until consistency is mixed throughout.
(2) Pour glaze in 9 x 13 glass casserole dish. Add walnuts if you’re crazy.
(3) Fill with baguette bread, sliced about 1 1/2″ thick (4 cm for our non-US friends). Put bread in white side up.
(4) Pour traditional french bread batter over top. I use about 5 eggs, 1/2 cup cream, dash of vanilla, dash of cinnamon, but you can find other recipes via Google.
(5) Cover in aluminum foil.
(6) Let sit overnight.
(7) Bake for twenty minutes at 350 or until golden brown.

EXPLANATION
I’m a GM, so making food the day of isn’t always practical, since I’m often running around like a chicken with my head cut off getting prepped. This French toast does all the work the night before, the day after, I can just throw it in the oven while I hunt down minis or NPC write-ups. GENIUS!

This recipe is perfect for those all day gatherings, as breakfast is the most important meal of the day. Have friends bring mimosas and fruit and coffee, and BOOM! Awesome breakfast.

I have to definitely give this one a try! I also thank everyone who has participated in the contest and wish you all good luck next time!