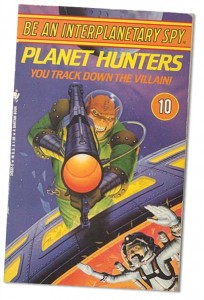 My recent post about TV inspiration has me musing about all the different inspirations that influenced me as a gamer. Probably many of you played the Choose Your Own Adventure books, and I loved the MERP and Lone Wolf books, but those I played after I got into gaming. Besides the Choose Your Own Adventure there was another similar series that I loved, Be an Interplanetary Spy.

They were a mix of choose your own way book and some puzzles to solve. You younger kids have your consoles and computers, we had books and you had to turn pages. That’s old school! Sadly I no longer own the books; I got rid of them when I got into “serious literature”, somewhere in 10th or 11th grade.

What I do remember is how much fun they were, and I’m pretty sure they inspired a lot of my Star Frontiers games (along with Atari Force and Marvel Comics). This little post now has me scourging the internet for them. I better go, I’m sure I can score some on eBay.

So what game books did you like before being a gamer or in your early life as a gamer?