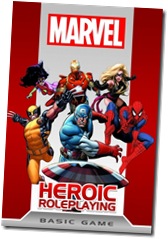 Yesterday the Marvel Heroic Roleplaying game by Margaret Weis Production has been released in PDF form. I’ve been looking forward to this game for a while, mostly because I heard good things about the Cortex+ System. I also have a soft spot for all kinds of superhero games (even though I never actually played one) and I enjoyed most of the recent Marvel super hero movies tremendously, so I had to pick it up.

The 232-paged PDF is reasonably priced at $12.99 especially for a licensed product and overall it looks great. The artwork and layout are top notch and it’s fun just to leaf through the book.

The rules are something you need to get used to. At least I had some trouble understanding how things are supposed to work. The core mechanic involves assembling a dice pool from various sources, like your characters abilities, powers, gear etc.
Sounds easy enough, don’t you think? But how you read the roll result is a bit more complicated matter. And on top of that you can use plot points to influence the results even more.

But once you’ve wrapped your head around the mechanic, I think Marvel Heroic Roleplaying can be a very fast-paced and freeform experience. Aside from the rules it contains a starter adventure (which they call an “Event”) and datafiles for a few iconic Marvel super heroes (like Captain America, Iron Man, Spiderman, etc.).

What irks me a bit are two things:

Aside from that the Marvel Heroic Roleplaying looks pretty interesting. If you’re a fan of super hero roleplaying games, you should definitely give it a look, especially if you liked the other Cortex+ games by MWP.