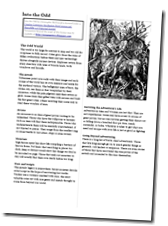 I think I have talked about Chris McDowall’s Into the Odd on Stargazer’s World already. It’s a very cool fantasy game with horror and sci-fi elements that is reminiscent of OD&D.

But instead of focusing on combat and treasure it is all about exploration of strange places and weird magic no one understands.

Chris has run the game for me and a few others several times now and it already ranks as one of my favorite games. The tone of the game is different from most others I’ve played so far. While playing the game I never felt my character was safe. Behind every corner death could lurk – or something worse than that.

And the powerful arcana (Magic artifacts that provide spell-like abilities) my character wielded could as easily kill me as they helped me to overcome the weird obstables we encountered.

Into the Odd is a welcome change of pace, especially when you’re fed up with killing things and grabbing their loot. Chris recently created a nice PDF that contains the current draft of the rules and which also includes “The Iron Coral”. Enjoy!

It’s the end of the world as we know it…