I have various game related addictions I need to keep in check. The first pre-painted plastic miniatures, since I have no talent as a miniature painter they are perfect for me. The second, maps! I can never have enough. I have Map Packs, Flip Mats, WotC Tiles, and I don’t use half of them. So I need to keep my addictions in check, I’m being more conscientious about which minis I get and the maps I buy.

Recently through Kickstarter I discovered the Mass Transit IV project, backed it and was really happy with the product. My one complaint, the maps were not laminated. So lo and behold, I am not alone. Along comes this new Kickstarter project. 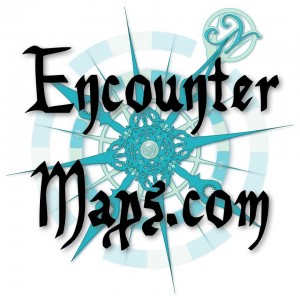 RPG and Miniature Gaming Battle Maps is a project that is seeking funding to finance the creation of four fantasy themed maps. Their aim is to create high quality; large poster sized (24×30 inch or 61×76.2 cm), laminated maps, in full color and not folded. They mean to ship them rolled with no creases. While creases in Flip Mats don’t bother me terribly, they are right that they rarely lay flat and the creases make placing minis on them tricky.

They seem to have taken a lot of considerations when conceiving their project. The samples of the artist are very promising and while there is no picture of the actual maps (I guess they are waiting for the funding to get this going) the samples definitely show promise. I think I’m backing this project!

If you are into maps for RPGs or miniature games, be sure to check it out, best of luck to the folk at Encounter Maps.