Real life has really taken a chunk of my blogging time, so my posts have been infrequent at best. I love sharing my thoughts on games and gaming with the wonderful readers of this blog, as well as being able to review products. It’s a wonderful feeling discovering an awesome book and sharing it with others. That said I have taken FOREVER on some reviews, and Michael knows which one I’m talking about. I’ve had some review copies from Open Design for a while and I have been remiss in sharing my thoughts on a pair products. So let’s get on with it! 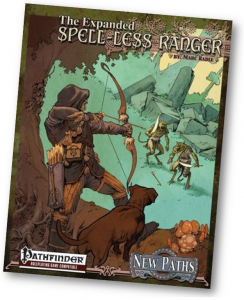 What about The Expanded Spell-Less Ranger? A review…

In a recent discussion online the subject of rangers popped up and a longtime friend who like me is a fan of Pathfinder, mentioned he doesn’t play a RAW Ranger when he plays. I have never gotten the knee jerk reaction to the dual wielding spell casting ranger. I understand the love for Aragorn, but I was a teen when the Icewind Dale Trilogy came out and gave us the “quintessential” D&D ranger Drizzt Do’Urden. I am NOT a fan of the dark elf and the novels I loved as a teen did not age well in my opinion. But by the same token, I am not a Tolkien fanboy. I recognize his importance and enjoyed The Lord of the Rings but they are not my favorite novels. So I have no pony on this race! Let’s look at the book…

The Expanded Spell-Less Ranger is a 15 page PDF with 10 pages of actual content and two pages of sheets for the class, available for $3.99 the Kobold Quarterly store. It is an expanded version of the same class originally presented in Kobold Quarterly #11. The original version was almost 3 pages and I thought it was a terrific alternative for the Ranger. After reading the expanded version, I like the idea and execution even more.

The Spell-Less Ranger is now an Alternate Class for the regular Ranger (which means once you’ve taken classes in the Spell Lass Ranger Class you can’t take any regular Ranger levels). As an aside, I realize calling it the Spell-Less Ranger is functional, it tells you just what the class is, and characters don’t have to identify themselves by their class name in-game, but after reading the book I wished the class had an alternate name, but I digress!

What are the changes? Well spells are out the window, big surprise there! What replaces them? Mechanics which aptly represent a skilled tracker, wilderness combatant, the character tracks, has wild empathy, combat styles, but the spells are replaced by talents akin to those of the rouge. Some have overlap with the Barbarian, and to me that is a good thing. The character also has some enhanced non-magical healing abilities many of the talents play off favored enemy and favored terrain choices.

There are new feats that can enhance animal companions, improve combat styles and boost favored enemy and favored terrain bonuses. While a few may be of interest to other classes these are pretty Ranger specific, spell-less or not. There are two new archetypes presented the Dual Style Ranger, who masters two fighting styles, but only gets one favored enemy, and the Companion Bound Ranger, focused on (surprise!) animal companions. The book reprints the Ranger’s new combat styles from the Advanced Player’s Guide which are options for the Dual Style Ranger archetype. The last to pages are a sheet for recording favored enemies and favored terrain, allowing you to track the bonuses as the character goes up in levels, and an animal companion sheet. Simple but very useful!

Overall I think this is solid expansion to the original concept. If you like the Ranger class, whether the spell-casting bothers you or not, make sure you check it out.

Let’s move on to the other book… 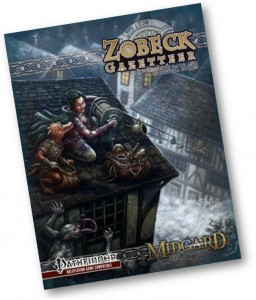 What about the Zobeck Gazetteer? A review…

This is a slightly larger book! 118 pages, including cover and back cover (115 pages of actual content). The Zobeck Gazetteer is available as a print + PDF bundle for $19.99. This book is a guide to the fabled city in the Midgard campaign, the setting is wonderful, but the book is written in a way that makes it easily adaptable to other campaigns or homebrews.

There is historical overview of the city, life in the city itself, with some great illustrations all through the book. I loved the details on the cost of real estate and living expenses in the city’s different districts. The discussion on guilds, cults and deities, while specific to the city, sparked so many ideas for my own campaign. Specifically the guilds are easily transported to other settings.

The chapter on NPCs and creatures alone makes the book well worth it. The city denizens add so much to the feel and tone. Before I forget, there is a preponderance of clockwork machinery in Zobeck, giving it an almost, but not quiet, steam-punk feel. I like the implementation very much! The chapter on magic, including spells and magic items, closes the book.

I am at a moment in life when I often avoid books that seem too setting specific. That may appear to be the case, but don’t be fooled. Midgard fans will undoubtedly love this book, but after readying it I found that this book continues Open Design’s efforts to walk a fine line between setting specific and generally useful. I think they succeeded. The book works perfectly with two other previous products I reviewed a while back, Streets of Zobeck and Alleys of Zobeck, check them out as well!

So those are my two reviews. I still have others to write, but that shall suffice for now. Thanks to the fine folk at Open Design for providing review copies of both books.

PS – Super Genius Games has a book out, #1 With a Bullet Point: 6 Spell-Less Ranger Feats, with new feats for the spell-less ranger. I have NOT read the book, but it’s on sale for $0.50, half off! If you like the Expanded Spell-Less Ranger this might be of interest as well.