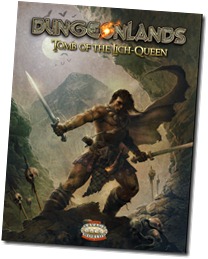 Savage Mojo’s Tommy Brownell contacted me a while ago and informed me about a Kickstarter they are running.

They are raising money over Kickstarter in order to be able to create two books, one for Pathfinder and the other for Savage Worlds, and a wide variety of accessories from character cards to a full soundtrack.

The Tomb of the Lich Queen is a deadly dungeon which serves as a prison for an angel called Anat. For about two-thousand years the evil Lich Queen has held the angel captive and the tomb has lured in many heroes who failed to rescue the angel.

The initial goal of $5,000 has already been met, but if they can reach the stretch goals Savage Mojo will be able not only to turn it into a whole trilogy but ultimately release it as a boxed set.

The deadline is October 14th and if you are into old-school dungeon crawls you should at least check it out.