Hello, me heartys. As ye all may well know ’tis Talk Like A Pirate Day. That’s why I decided ‘t would be fun t’ talk about Seafarin’ hearty roleplayin’ games today. Arrrr! 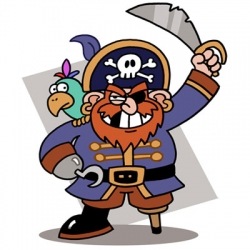 Even before the successful Pirates of the Caribbean franchise I always had an interest in the pirate genre. Back as a kid I watched all the pirate movies I could get my hands on. I totally loved Sid Meier’s Pirates! and played the hell out of it. The first pirate-themed pen & paper roleplaying game I played was a homebrew campaign written by my good friend Peter. After we ended the previous Rolemaster campaign in shame (this is a story for another time), he decided to start a new campaign and this time the players were a pirate crew. The game was set in the same world as the previous campaign, but was set 1000 years after the events of the other campaign. I actually played the ship’s captain and learned the hard way that pirates can’t be trusted.

Some time later I stumbled upon Pinnacle Entertainment’s Pirates of the Spanish Main, a stand-alone game based on WizKid’s Constructible Strategy Game and using the Savage Worlds rules. We actually played a couple of times but then moved to Rippers for some reason. Even though none of my Pirate campaigns lasted a long time, I still think it could be fun to revisit that genre in the future especially because creating a pirate sandbox campaign sounds like it could be a lot of fun.

The question I am asking my players today is: “What’s your favorite Pirate RPG?” There are quite a few pirate-themed games out there, some are just supplements for existing systems, others are stand-alone games. The question is which one do you like best and why? As always every comment is highly appreciated.

From The Imperial Library