This morning I had a conversation on Twitter about the fact that bloggers don’t really seem to be excited about D&D Next anymore and what alternatives to D&D I would recommend. Since 140 characters are always a bit too short to explain things thoroughly I decided to turn this into a post.

When I read the first playtest rules WotC provided us with I was positively surprised. D&D Next feels more like a retro clone with some 3E elements than D&D 4th Edition, which was a welcome change from my point of few. I was cautiously excited about D&D Next back then. My excitement waned WotC stated that D&D Next was still very far from release and the way they conducted playtest surveys worried me. I felt they just answered wrong and totally irrelevant questions. But that’s probably subject for another post. What matters is that at this moment I don’t need to get my hopes up for D&D Next when there are so many cool games out there to play.

Since we are looking for alternatives for D&D I will talk about games that allow you to run games in the fantasy genre. A list of all possible alternatives would be beyond the scope of that post. Check out the review category here on the blog for some examples. 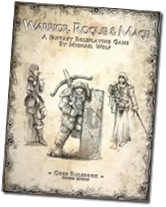 Let’s start with some free games. I hope you don’t mind I start with the game I designed myself: Warrior, Rogue & Mage. WR&M is a rules-light roleplaying game that uses the iconic classes of the fantasy genre as attributes. The system itself is actually classless and allows you to create a wide variety of characters. Aside from the 40-paged core rulebook there are a couple of supplements that expand on the rule system. The game can be downloaded for free from my Stargazer Games site.

Another game I wholeheartedly recommend is d6 Fantasy. I fell in love with the d6 System back in the day, when a friend introduced WEG’s Star Wars Roleplaying Game to us. D6 Fantasy is basically a variant of the Star Wars ruleset tailored for the fantasy genre. The d6 System or more precisely “OpenD6”  is now available under the OGL and d6 Fantasy, d6 Space, and d6 Adventure are now available for free on RPGNow. The d6 System is not really that crunchy, but if you prefer your rules to be ultra-lite check out MiniSix, which is also available for free.

I also have to mention Dungeonslayers created by my good friend Christian Kennig. For the longest time this old-fashioned German roleplaying game was only available in German or in the old 3rd Edition. But luckily the 4th Edition which greatly expands on the original game without making the rules more complex (the core rules are still about 20 pages long) are available for free for a while now. If you are looking for an old-school experience using modern rules, you should check it out.

Ok, I wanted to focus on non-D&D stuff but I think I should still mention that there’s a plethora of D&D retro clones out there and usually the PDF version of the rules are free. I am not really an expert in this subject, but I like both Lamentations of the Flame Princess and Swords & Wizardry.

When it comes to commercial games, there are a few titles I usually recommend. If you have the chance to pick up a copy of Warhammer Fantasy Roleplay 1st Edition (which has been out-of-print for ages now), don’t hesitate. It’s still one of my favorite games to date. The core rulebook really includes everything you need to play (aside from dice of course) and even though the system has its issues it’s perfectly playable. WFRP 1E’s version of the Old World is very grim and gritty and IMHO a welcome change to most squeaky-clean high fantasy settings. Check out this post to learn about the differences between the three editions of WFRP.

I’ve heard a lot of good things about Burning Wheel and Barbarians of Lemuria. I haven’t played either and I only own the latter, but I still wanted to mention both. What I love about BoL is that it’s the perfect Sword & Sorcery game. If I ever had to run a game inspired by Conan I would probably use BoL. Another cool Sword & Sorcery RPG is Shadow, Sword & Spell by my friend Richard Iorio of Rogue Games. The 12° System it uses has its quirks but its definitely easy to play and run. A big plus is the fact that the setting has been clearly influenced by H.P. Lovecraft’s stories.

If you are a fan of percentile dice systems, I can recommend Legend by Mongoose. It’s their latest version of the Runequest system and works pretty well. I have to admit that especially the combat is a bit crunchy for my tastes and I definitely recommend the use of a good GM screen to make things easier for the GM. But if you can handle D&D 3.5E or Pathfinder, Legend should pose no problems for you. The PDF version of Legend sets you back just $1 and all the supplements are pretty reasonably priced as well, so it’s definitely worth a look. I also thought about using Chaosium’s Cthulhu Dark Ages for running a fantasy game. This might sound odd at first, but I definitely think it should work.

Last but not least there are a lot of generic games out there that should handle the fantasy genre pretty well. GURPS comes to mind as well as Savage Worlds Deluxe, and Basic Roleplaying by Chaosium. The latter is actually pretty close to the aforementioned Legend but suited for all genres.

There are of course countless other great fantasy games out there that you could check out while you’re waiting for WotC to get D&D Next done. Listing all of them would be an almost impossible task, but I ask you, dear readers, to post your thoughts on the subject in the comments below. What non-D&D fantasy games do you recommend and why?

More maps? Sure why not! A new Kickstarter