Wolfgang Baur, the setting creator and lead designer, and the rest of the writing team, Jeff Grubb, Brandon Hodge, Christina Stiles and Dan Voyce (they are the ones with credit on the cover but there are a few more outstanding creators on the credit page, you will not be disappointed) created a great campaign setting. It has the advantage of being familiar to fans of previous books by the publisher, but it is so much more. You are not getting filler material rehashed here; you are getting a broader picture of what you already loved. 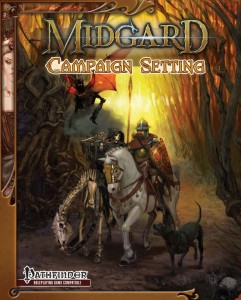 I have a confession to make. I have not read the WHOLE book. I received a review copy on PDF and I dove right in. If you have been reading gaming books for a while, like me, you probably read a couple of pages, skim and scan around the book, go to the chapter with the rules or content that most interest you and read the book piecemeal. Slowly getting through it and maybe, eventually, reading it complete. The Midgard Campaing Setting is a 298 pages file, 288 of those are content, with an additional four pages of a thorough index, a necessity in any campaign setting.

So what happened? I read the introduction (yeah I’m one of those…) and I could not stop reading. By the end of that night I had read far too late into the night and I stopped because I had to be at work the next day. I have not been able to put it down since. I am still not completely through it, there are a couple of chapters to go, but this one deserves a read from cover to cover.

The art is up to Kobold Press standards, that is to say excellent. There are some pieces recycled from previous products, but used very well, some cropped, mostly fitting, and they did not bother me at all. The rest of the art is new and top notch; as is the cartography, but don’t take my word for it, watch the YouTube video for the campaign. The layout is clean and enhances the book, very fitting.

I admire how this book mixes the mythology we know, with the classic tropes of fantasy and makes it fresh and unique to the setting. Examples you say? Elves, they are pivotal to the campaign, their influence is felt deeply, but they seem alien, distant, not at all like the typical elves. Familiar but different, and that’s a constant through the book.

Chapter 1 covers the history of the campaign in a very concise way. Enough to inspire, but with space to personalize your campaign, the fact that this is an evolving campaign is reinforced and you are told explicitly this is your campaign. Midgard is not a campaign bogged down by a meta-plot, this is your world; do with it as you please. I liked the discussion of time keeping, the planes, Ley Lines (an integral part of the setting), it was reminiscent to me of the old Greyhawk and Forgotten Realms boxed set. But while the original Greyhawk setting’s discussion on flora and fauna were like reading a textbook, this part of the book was used very effectively to convey the feel of the setting and set it apart. 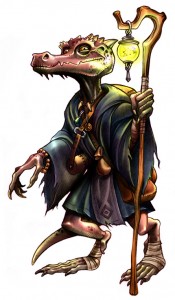 Chapter 2 is races, where even the familiar ones get an overhaul. The Dragonkin, Geargforged and Minotaurs are new and intriguing and seem balanced. The idea of the elfmarked, people with elven blood in their ancestry, using the regular half-elf rules, are a perfect example of using the existing rules in a very fresh way. The “major” races are a different mix than the typical fantasy campaign, but even the lesser races, that all get summarized in one page, seem interesting. I particularly like the dark twist on gnomes. And of course, there are kobolds as a player character; it is Kobold Press after all. You can play their mascot!

The social status rules are simple, usable, and open up all sorts of role-playing possibilities. The languages list, something that is usually just that, an uninspiring list in most settings, is used to reinforce the setting and there are even rule effects for knowing certain languages. The feats and traits are used to reinforce the differences of the regions with mechanics that will make characters from those regions actually different!

From Chapter 3 to Chapter 9 is the meat of the book, a region by region exploration of the world. This is a great presentation, detailed to the point most GMs will need, with many areas to fill with your own creations. Not to suggest this is merely a GM book, even players will find these chapters interesting, and the GM still has a lot of wiggle room to change things up… It was a great idea to do this by large region that share a thematic element, not merely by nations. This groupings help reinforce the relations that exist in each region, while at the same time making them distinctive. There are rules here and there, such as equipment, but this is mostly background, the majority of the book is just good solid setting. While the rules on the book are for Pathfinder and AGE, the largest chunk of the book is setting, which you can use in ANY fantasy game. This is where the book TRULY shines, I still have three chapters to finish, but I won’t spoil any of what I’ve already read. This is what you’ll play for. I’ve compared Kobold Quarterly before to the old Dragon Magazine. Well after reading these chapters, this setting is reminiscent of the great campaign settings of old!

Chapter 10, the one on the pantheons, is another winner. The idea of a priest of many goods, the pantheist priest is another great idea. Something simple to implemented that feels not just appropriate on this campaign, but on my home game as well! The pantheons fit together thematically, the symbols do not look like modern clip art but, for the most part, as symbols appropriate to a fantasy religion. I also agree with the decisions to NOT literally illustrate deities, it fits the idea of gods being truly mysterious; these are the representation of gods made by their worshippers.

The rules thought the book are for the Pathfinder RPG. The AGE rules are in a separate appendix. While I love the AGE rules I have only played it a couple of times and I am not the best judge for how the rules work. They seem solid and reinforce for me the versatility of that rule set and its viability as the contender for the non-D20 fantasy go to game!

I am a compulsive homebrewer, I rarely play campaigns straight from a book, and as much as I love this book I don’t think I will switch my long running campaign to Midgard. Still this book has a LOT for me. There are rules throughout that I will steal for my game, such as Ley Lines, Status rules, the mechanical effects of languages, new races, traits and feats, pantheists priests, and then there are the details on nations and places that can be picked up and inserted into any campaign. This book will see great use at my table…

The Seven Secrets of Midgard on page 9 that list what makes this world different from other settings is right. This is not your typical setting, and that is great! The book is available in three formats, in PDF via RPGNow for $19.99, in a bundled softcover and PDF for $39.99 and in a hardcover and PDF bundle for $49.99. The Kobolds have done it again, check it out!