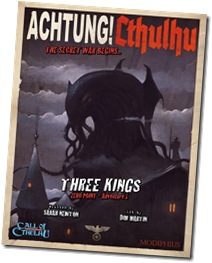 The possibility of links between the Nazis and the occult have been a topic of speculation for a very long time and eventually became a trope in fiction. Just think of computer games like Return to Castle Wolfenstein or the Hellboy comics. Especially the combination of Lovecraftian horror with the real horrors caused by the Nazis seems to be a very potent mix.

Modiphius’ ACHTUNG! Cthulhu is a series of adventures for Call of Cthulhu and Savage Worlds (you need a copy of Realms of Cthulhu for this; versions for Trail of Cthulhu and PDQ are in the works) that are set in WW2. But not everything is as we remember it from our history books. The Nazis are using the occult to give them an edge over the Allies and play with forces better left alone by man.

“Three Kings” is the first adventure of the Zero Point campaign set in the world of “ACHTUNG! Cthulhu” written by Sarah Newton. It’s a 44-paged PDF and contains a stand-alone adventure that is set into a Nazi-occupied Czechoslovakia in summer 1939. The adventure includes a couple of pre-generated military characters, but you can also create your own characters using the normal Call of Cthulhu or Realms of Cthulhu rules depending on which version you want to run. The adventure even provides possible entry points for academic or spy characters. So you don’t have to play military personnel. 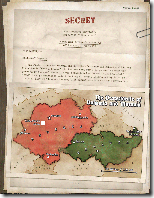 I don’t want to spoil too much of the story, so I won’t go into too much detail, but let me give you a short overview of what the adventure is about. Czechoslovakia has recently been occupied by German forces and according to British intelligence there are reports of atrocities being committed by the Nazis in Castle Karlstein about 40 kilometers southwest of Prague. The characters are sent in to investigate. At first I was worried the adventure might be too much focused on combat and fighting Wehrmacht soldiers, but luckily that’s not the case. There are a lot of opportunities for investigations and interacting with the townsfolk near Castle Karlstein and the Czech resistance. All in all there seems to be a good balance between combat and non-combat activities.

What really blew me away is the high graphical quality of the adventure. Each page looks like a page from a mission report folder (or at least like how I imagine something like this would look like). There are a lot of great-looking images and maps. The adventure also features a lot of helpful sidebars that give tips on how to run the adventure or provide information on the larger picture. The appendix contains not only a set of pregenerated characters but also a couple of new rules and the complete mission briefing as player handouts. When you buy the PDF you not only get a full-color version of the adventure, but also a printer-friendly one which doesn’t look as sweet but will save a lot of your printer’s ink.

Both versions of the adventure currently available are pretty much identical aside from game stats and the rules sections, so what version you pick depends mostly on what game system you prefer. From what I’ve seen the adventure is well-researched and the NPC names are pretty fine. Too often than not authors who don’t speak German come up with the silliest names for German characters. I am glad Sarah Newton managed to avoid that pitfall. Overall “Three Kings” is a well-written adventure that I can wholeheartedly recommend to anyone who is interested in running a game of Lovecraftian horror set into WW2. I have to admit that I am very interested in future ACHTUNG! Cthulhu products after reading this.