Eloy Lasanta of Third Eye Games recently me told me about the Kickstarter project he’s running right now. Together with Chris Lewis Carter who created the Camp Myth series, he’s trying to raise funds for a roleplaying game in which you play mythical kits from across the globe trying to earn merit badges for skills like Phoenix Watching, Kraken Fishing,or Golem Building.

The pledge levels are pretty nice, for just $10 you’ll not only get the PDF of the final game but also an ebook copy of Camp Myth #1: Phoenix Watching. The game will use a modified version of Third Eye Games’ Pip System which powers Eloy’s other games like Apocalypse Prevention, Inc. or Part-Time Gods. 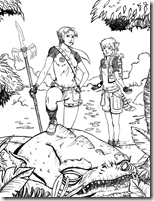 I have to admit that the setting is not my cup of tea, but Camp Myth: The RPG sounds like it could be fun for kids and young adults alike. If the premise interest you, why not check out the official Kickstarter page and back the project? There are still 19 days to go.