A couple of days ago I wrote down a few notes on how FTL travel and communication is supposed to work in my Galaxy Rising game. I haven’t decided yet, how fast you can travel using a Slipstream drive nor have I set a limit for FTL communication. I’ll set those limits when the setting has progressed a bit further. In the short fiction piece I released a science vessel made a trip to the Orion nebula, which is about 1,344 light years away. This might be around the upper range limit of what League drive technology is capable of. 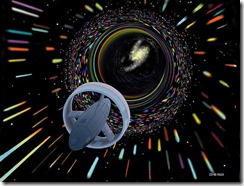 The slipstream drive invented in the late 24th century finally allowed fast interplanetary and interstellar travel. The drive creates a slipspace tunnel through which the vessel can travel at faster than light speeds without breaking special relativity. Another use of the slipstream drive technology are the so called slipgates which create semi-permanent slipspace tunnels through which ships without their own FTL drive can travel. The League has established an extensive slipgate network in their area of influence. While in slipspace a vessel does not interact with matter in normal space.

Slipspace Communication
The physical properties of slipspace also allows electromagnetic waves to propagate much faster than in normal space, allowing almost instantaneous communication over vast distances. State-of-the-art slipstream drives can also generate several slipspace tunnels with tiny diameters in order to allow laser or radio communication over several light years. Alas it’s impossible to open communication tunnels while the ship travels in slipspace, so starships have to make regular stops in order to communicate. The League has constructed a network of relay satellites which which is known as LeagueNet.

Would such a drive system be possible from what we know today? I highly doubt it. But it works in the realm of fiction and has a couple of limitations that can be used by to help the plot of your game. FTL travel is not unlimited in range and it still takes a while to travel from A to B. Communication is faster but probably more limited in range. Which means starships are pretty much on their own when far enough away from League space. And this alone always helps to create great adventure opportunities. “You’re on your own. What do you do?”