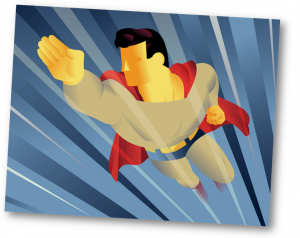 My longest running super hero campaign is over… It lasted almost two years, and it has been my favorite supers campaign ever! Let me give you some perspective: We began playing the first week of January 2011 and finished the second week of November 2012. One year and eleven months. Of course we didn’t play every week, real life happened, we took a break to play a zombie adventure/mini campaign, so we actually played a total of 72 sessions, what amounts to 18 months of weekly gaming. I’m a big believer in consistency and trying to keep the game going on a weekly schedule to build momentum, keep it fresh in everybody’s mind, and to create a rhythm. It worked, and here after giving myself some time to allow the fact that it is over sink in, I am very happy. Was it perfect? No! But I think I learned a lot, and the players enjoyed it overall. So in an attempt to learn from this process, I’ll write this little postmortem and share it with you, hope you find it interesting.

I’ve posted about the campaign before, the background, the questionnaire to gather player information and determine their interests, challenges, mid-way retrospective, so I’ll try not to retread ground covered before. I’ve tried my hand at supers gaming in a couple of occasions, in fact the very first original game I tried to write was a supers game. I played a lot of the old Marvel game (FASERIP) and as a comic fan the genre was not new to me. I’ve run three major campaigns before, only one I would consider successful but never completed. The other two were aborted prematurely and although both had elements I liked ultimately I think neither the group, nor myself, were really into it. For a while I thought supers game would not be a genre I would run a complete and successful campaign in. But then we played a wonderful supers game run by my friend Luis Lao and had SO MUCH fun I decided to try my hand at it once more.

I weighted various options; I had done typical four-color games, an alternate history game, but based on an idea from my friend Pierre Butler I decided to go a different route. Instead this campaign would be in a world were there had been NO powers before and the players would be amongst the first people gaining powers. I used the questionnaire I mentioned before to get a feel for what the players expected, and from the get go I knew there were WIDLY different expectations.  So I embarked in an attempt to harmonize their disparate ideas into a cohesive game.

Expectations were perhaps the greatest hurdle, and while we managed, we never truly conquered it. A super hero game means a lot of different things to different people. Anything from grandiose super heroics to street level vigilantes And while we discussed it, and made established a baseline, I wanted to provide room for all types of characters. About half the group wanted darker more realistic while the other half wanted more heroics, more black and white and less gray.

Being based on the real world with super powers just emerging I found it hard to tell a story that did not explore some dark aspects of what these extraordinary abilities would mean to society. There was also larger than life, planet destroying (literally) adventures. But in the end one player bowed out, not really being a supers fan and I know another was not 100% satisfied with how everything turned out. The other five, well the other five I think enjoyed it!

But that’s just one thing among many positives. The game really had some GREAT role-playing and character development. In many ways I felt people invested in the characters in ways I had not seen in a long time. The system helped. Mutants & Masterminds 3rd edition, while daunting upon first readying, is REALLY flexible and allows you to make just the character you want, but runs with ease once you are familiar with it. Guesstimating for minor NPCS was easy and the many available pre-made characters are easily re-skinned for the game.

As a GM I embraced electronic tools to run my game. I ran adventures from my laptop, used the campaign’s Facebook group page as a place to keep track of XP, lists of NPCs, images of PCs and NPCs. This in fact became my preferred method of keeping an NPC list, a gallery of art and pictures. I also used Power Point a lot to plan my adventures visually, to make NPC connections, but my evolving use of Power Point can be the topic for a whole other post.

Despite all the good, Mutants & Masterminds was also a hindrance. Being able to make just the character you like meant that everybody tinkered with their powers, wanted to try something new and as mastery of the system increased, some really powerful combos came in to play. The system is flexible enough that I could handle them and the game remained challenging, but character roles blurred. Our original desire that each player filled one niche vanished.

The blame on why that happened is shared. I believe players should enjoy the game and try what they like so I really make my best effort to say yes whenever possible, so I allowed some players to try out new things for their characters, which other players saw as encroachment on their roles. But by the same token, players themselves had little interest in keeping their powers from duplicating those of others. We tried to talk about it, but it was never fruitful. By the end there was a lot of crossover in terms of powers. Not everybody did it, but we are all to blame for it.

We had some controversial events happen in the game, but characters developed relationships (two weddings by the end), one male player ran a female all through the campaign (something that seems taboo in some circles but has never been a problem at my table!), the players changed the world and the end was open ended and not everything was perfect. My kind of campaign!

What did I learn? What would change in future supers games? Maybe enforce a theme or style more consistently, right form character creation. But then again I’ve tried this in my failed games, so there might be something to be said for variety. Keeping characters focused on roles would be something I would do better. Making sure everybody has a place and that they feel that what makes them special remains so!

Looking back it was a fun time. The campaign was planned as an 8 month game and the players asked me to go on, and I was more than happy to oblige. At the end of the day the fact that players wanted to play more of the game is the best testament to the fun we had together. I want to publicly thank my players, Luis Alvarado, José Bellavista, Fernando Berríos, Pierre Butler, Hector González, Luis Lao, Carlos Matos and Sara Robles. You guys are the reason I show up to run the game every week!

I have not given up on the campaign. The Facebook group remains active and I wrote a little teaser for an epilogue I’m writing. Who knows we may even visit the Dawn of a New Age campaign in the future.