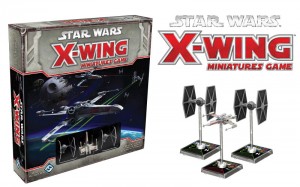 Seems I am on a Star Wars roll these days…

Recently during a Puerto Rico Role Players geeknic I got to play the Star Wars X-Wing Miniature Game. I rarely play miniature games. I have in the past but they have never really caught my fancy. Many of my closest friends are miniature and strategy games enthusiast, and in the past I have played Epic, BattleTech, Man O’War, and Battle Fleet Gothic. Except for that last one form which I had the basic box, all the others I played with friend’s armies. While some of those games were fun, most of them took too long or gameplay bored me. I discovered that when those games dragged too long I just zoned out. I can role-play for hours but long war games and strategy games just bore me.

(I did play an old Axis & Allies game that lasted about 18 hours, but we had as much fun off the board as on the game itself. Might have been sleep deprivation, but I digress!)

During the geeknic, some friends played the X-Wing game and I just couldn’t resist looking. The minis looked great, but all the components just fueled my interest. After a short explanation I got to throw some dice and try out the game. What can I say? It was fun!

It was very easy to explain and pick up; the way the components are organized it is easy to understand what they do and the wheel used to plan out your ship’s movement seemed innovative and very interesting. You pretty much decide your ship’s maneuver ahead of time and hide it until your turn to move. One of the people teaching me to play likened it to Poker and well there is certainly an element similar to that.

Despite being very easy to learn there are lots of strategy options to make the game more interesting. From the stress your pilot suffers when performing difficult maneuvers to special abilities of pilots. I was pleasantly impressed and want to play it again. I’m definitely buying this game! 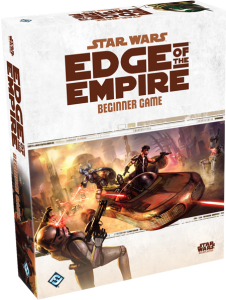 And what about the funny dice? I know that types of dice are part and parcel of miniature games, but I’ve always been reluctant to use them on my RPG. That is why I have not picked up the Edge of the Empire, but after seeing what Fantasy Flight Games did with the miniature game, I think I will give the RPG a try.

If you can, give this game a try. Despite my love for Star Wars I was skeptical and they made me a convert!

Some Thoughts on Fantasy AGE

The WEG Fan Forums are back online