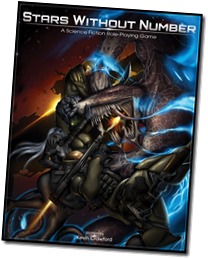 For the last few weeks I really struggled getting anything done. I don’t know what caused it – perhaps it’s this long, cold and dark winter – but my mental health issues have been more severe lately. At this moment I am slowly starting to feel better. The bouts of anxiety I get from time to time are fewer and further between, but I still have troubles when it comes to creativity.

But just today I found a good way to jumpstart my creativity again. Stars Without Number has a pretty elaborate World generating system that allows the game master to quickly roll up detailed worlds. There are random tables for atmosphere, biosphere, tech level, population, tags, etc. Within a few minutes you can roll up a whole slew of worlds. Since I want to run SWN in the near future I decided rolling up a sector would be a good start. So I got my dice and started rolling.

To make things easier for me, I created a spreadsheet in Google Drive that allows me to enter the numbers I rolled and it automatically puts out the results. That way I didn’t have to write everything down myself. Instead I just rolled and watched as the worlds slowly took shape on the spreadsheet – and in my mind. Especially the tags generated by this system really help to jumpstart one’s ideas.

For one world I rolled up the tags Unbraked AI and Zombies. Immediately I had ideas about a world controlled by a mad AI that creates mindless cyborg zombies from any hapless human being it can get its hands on. This world could be the perfect setting for a horror-themed adventure. In another case I got Desert Planet and Alien Ruins, and my mind was filled with ideas of a lost alien civilization whose remains are scattered across a deadly desert. Within a couple of minutes I had a couple of great adventure ideas.

Of course rolling up the worlds is just the very first step. I still have to turn everything into a workable setting. Some worlds I created using the random generation method are pretty silly and don’t make much sense at all, so I’ll have to make some subtle – and not so subtle – adjustments in the coming days. But the important part is that using the random world generation in Stars Without Numbers helped me getting some creative work done. Now I have to make sure that my perfectionism and self-doubt don’t stop me dead in my tracks. Wish me luck!