I’ve blogged at length about Puerto Rico Role Players, a local group of role-playing game enthusiasts dedicated to promoting tabletop RPG games in Puerto Rico. Besides running demos a cons, something that’s become a tradition over the last three years have been the geeknics. Picnics for geeks where we gather to game; spend time with other RPG and share the love for all things geek!

It’s been three years now… How time flies! And for the anniversary of our first large gathering as a group we planned a BIG bash. We are going back to the same place where the first one was held, Luis Muñoz Marín Park and we plan various special activities.

Members of the group have already announced there will be a D&D Next playtest game, a Vampire Storyteller is recruiting players for his game and I will run a very special game, more about this momentarily! Besides the RPGs there is always somebody that brings a board game or card game to play. At the last geeknic people played card games, miniatures games and board games as well. So there is something for everyone! 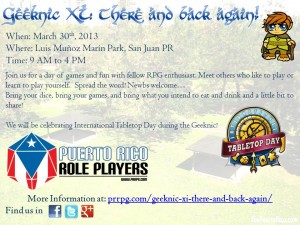 We’ll be at the park Saturday March 30th 2013, from 9 AM to 4 PM. The gazebos (ancestral enemies to all role-players!) are first come first serve, so we plan to be there when the park opens and stay till they close. For geeknics we ask participants to bring their own food and drink, and a little extra to share. We have activities created for the geeknic both in Facebook and Google+ where participants can communicate and coordinate what they are bringing so everybody wins. If you live in Puerto Rico, will be visiting during the weekend, or know someone in the island who might be interested in this, please let them know about the 11th Geeknic. We are more than willing to share what we know about RPGs and teach newbies just what RPGs are, so all gamers are welcome!

Since we know not EVERYBODY can make it there, we’ll also be doing a Google+ Hangout during the morning, probably beginning around 10:00 AM local time depending on our set up time, so if you’re interested in joining us virtually follow the activity page in Google+, we’ll have more information later in the week. Also that day also happens to be International Tabletop Day (we had actually set the date before they announced but it is a fortuitous coincidence) and we’ll be part of that wonderful initiative. The activity is even listed at their site. 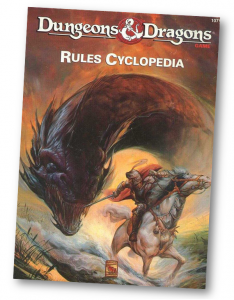 What about that special game I mentioned earlier in the post? I didn’t run a game at the last geeknic, neither did I at the very first one, but I am doing it this time around. And a very special game it is! At the previous geeknic someone brought a D&D Rule Cyclopedia and I almost ran a game with it, but I wanted to play certain games so I didn’t. Still the seed was planted and I could not put the idea away.

I also have had the urge to run a very special one-shot game for the longest time in my long running (25 years already!) home-brew  A story set in the past of the campaign, during a very important period of its history, a time my players have heard off but never played in. When conceived I wanted to run this adventure with my regular players who know the campaign best, with an older edition of D&D just like when the campaign started.

Alas, finding the time to run this game with our very busy (and often limited) gaming schedule proved hard. So after seeing the interest in the D&D Rule Cyclopedia at out latest gathering, I figured the perfect place to run this adventure was the geeknic! So I created the characters for the game, posted a little introduction in the PRRP webpage, Facebook and Google+ along with some classic art by Larry Elmore, Tony DiTerlizzi and other artists associated with the history of D&D as to set the stage. The response has been fantastic. I have space for 7 players and 4 people have already confirmed they are playing. All my notes are ready, all I have left is deciding whether I should run the game with no maps or miniature, or whether I should go all out and use minis, tiles and maps. Both options are open, I’ll let you know what I finally decide…

If you want to read the introduction to the setting, the adventure, brief character intros and the actual character sheets you can download a PDF for the Escape of Fortress Forgadin adventure. I appreciate any feedback or comments on the characters. It’s been the LONGEST time since I’ve played D&D BECMI, 1993 to be exact, so if you spot any mistakes or things I missed, let me know!

Thanks for reading, hope to see some of you at the Geeknic XI. 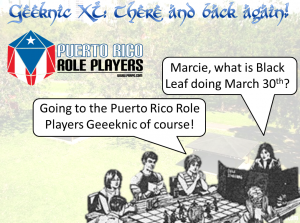 The time I almost quit gaming!