In the first post on this blog I actually said that I won’t be writing about computer games here. Today I want to make an exception from this rule. I have been an avid fan of computer roleplaying games long before I actually knew that tabletop RPGs existed. Most computer roleplaying games actually are not worthy of being called “roleplaying” games. Often the only thing they share with their tabletop counterparts are the underlying rules systems and several tropes.

But there are a couple of computer roleplaying games that actually allow you to roleplay to a degree. Others are great examples of world-building which could be an inspiration to GMs who love to create their own settings. There are three of these games I want to write about today. 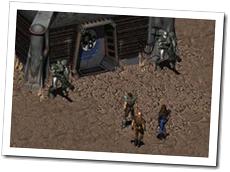 One of my all-time favorite computer games is Fallout. I am actually talking about the 1997 Interplay game here. The original Fallout takes place in a post-apocalyptic Southern California. It’s the year 2161 and family of the hero has survived the apocalypse in a huge underground vault. After a vital piece of equipment breaks down, the hero is sent out to retrieve a replacement from another vault. Of course this is only the first step in an epic adventure. What set Fallout apart from other games of the time was that you really could play the game like you wanted. You could focus on fighting your way through any opposition, outsmart or sneak around your enemies. In my first playthrough I played a charismatic and intelligent character that solved almost any problem with talking instead of shooting. I had a blast. The writing was solid, it had great humor, and a gripping, pretty non-linear story. Your decisions actually mattered, unlike in other games where different dialog options always lead to the same outcome.
In my humble opinion the Fallout universe is also deep enough to be used as a basis for a tabletop campaign. The sequels Fallout 2, Fallout 3 and Fallout: New Vegas are still great games, but the first Fallout is definitely the best title in the series.
Fallout was actually meant to employ the GURPS rules, but Steve Jackson Games was unhappy about the game’s mature content, so the developers had to come up with a completely original system. 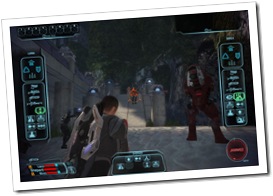 If you’re even remotely interested in computer and video games you must’ve heard about the Mass Effect series. The Mass Effect trilogy spawned several spin-off games for mobile devices, comics, book, an animated movie and there are even plans for a feature film. Mass Effect is a science fiction action RPG developed by Bioware which tells the story of Commander Shepard who is fighting against the mysterious Reapers who wipe out the major civilizations of the Milky Way in a regular cycle. When I first played Mass Effect I was surprised how deep the background setting was. The Mass Effect feels much larger than the game itself. In a way it reminded me of the Star Wars galaxy. Even after watching Episode 4 I felt that I have glanced into a much larger universe. I felt the same with Mass Effect 1.
The gameplay varied slightly during the series. Mass Effect 2 and 3 feel much more like first person shooters than the first game in the series. But like in the aforementioned Fallout, combat is not everything that matters in Mass Effect. The decisions you made actually mattered and sometimes things you’ve done in the first episode of the trilogy affected events in the last episode. The conclusion of the series was a letdown to many gamers, but overall Mass Effect is probably the computer game that had the biggest emotional effect on me. I have to admit that there’s one scene in Mass Effect 3 that brought tears into my eyes. This is something no other computer game has achieved so far.
Why do I recommend Mass Effect to tabletop RPG fans? Mostly because of the setting. Mass Effect is a incredibly deep (for a computer game) and well designed space opera that works great at the tabletop. I’ve successfully run a Mass Effect game in the past using Starblazer Adventures and there are many other conversions available on the internet. 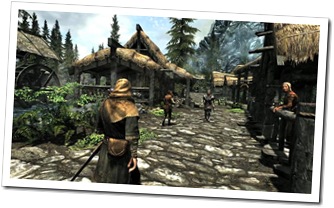 Skyrim is the lastest game in the Elder Scrolls series. Like it’s predecessors it’s set in the continent of Tamriel, which has been ruled by the Empire for millenia. But things started to go downhill after the last member of the Septim bloodline sacrificed himself. The game is set into the northern-most province of the Empire called Skyrim. The game starts with your player character being sentenced to death but a sudden dragon attack gives you the chance to escape and eventually start a new life. After a short and pretty linear tutorial during which you can flee from the dragon attack, a whole world opens up for you to explore. Skyrim is a huge and beautiful sandbox for you to play in. There are countless dungeons, several large cities, small towns, lone farm houses, hundreds of quests, a crafting system, houses for you to buy and decorate… The options are almost endless. The main story of Skyrim is actually not that great, but that’s probably not why anyone plays an Elder Scrolls game. The Elder Scrolls series always provided a great sandbox experience. Other parts of the series probably offered you a deeper gameplay – in older titles you could even create custom spells and own businesses – but Skyrim is definitely the most accessible game of the series. By the way, Ken Rolston, who was lead designer for two games of the series, Oblivion and Morrowind, was a pen & paper RPG designer before he entered the video game industry. I think it’s no surprise that the rules system used in the earlier games of the series reminds me a lot of RuneQuest.

Honorable Mentions
If you are looking for other great games aside from the ones mentioned above, check out the other episodes of the Fallout, Mass Effect and Elder Scrolls series. If you don’t mind the dated graphics and gameplay you also should give the Ultima series a try. It’s one of the longest running computer game series and loved by many, even though the last two installments of the series were pretty bad. If you’re looking for a truly memorable story check out Planescape Torment. In my opinion it’s definitely the best AD&D-based computer RPG out there. Troika Games’ Arcanum: Of Steamworks & Magicks Obscura is steampunk fantasy game that plays a lot like the original Fallout. It has some quirks and is still somewhat buggy, but both the story and the world are worth your time. It’s one of those settings I would to use at the tabletop one day. Last but not least, I have a treat for fans of George R.R. Martin’s Song of Ice and Fire series: Cyanide’s Game of Thrones is an underrated gem. The graphics are somewhat outdated and the animations and voice acting are not the best out there, but the plot is truly awesome.

What class are you?

My points of light…