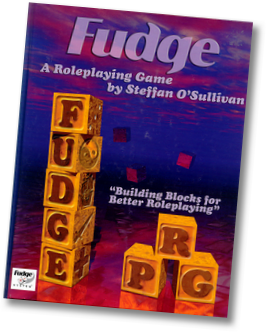 My relationship to Fudge was a pretty strange one. While I always loved certain aspects of it (the dice mechanics are pure genius), I didn’t really “get” it for a long time. I approached Fudge’s 10th Anniversary Edition like I approached most other games. But alas that just didn’t work. You can’t just pick up that book and start running. At least that’s not how it worked for me. Fudge offers endless options and I felt overwhelmed by those options pretty quickly. I always try to use rules-as-written at least for the first time I run a new game, and I just couldn’t decide which of the rules I wanted to use for my game.

Then I stumbled upon Micro Fudge. Micro Fudge is a very lightweight implementation of Fudge that did some of the heavy lifting for me. The author, Jonathan Snyder, has already picked a couple of Attributes and Skills and decided which options to use. This makes getting into Fudge so much easier. When I ran my XCOM game I basically just used Micro Fudge. Later, when I started to prepare my Fallout game I used the attributes and skills from the computer game but still kept a few elements from Micro Fudge. So Micro Fudge helped me to open a door to the huge world that is Fudge gaming.

After running Fudge a couple I feel much more confident with the system. And I am realizing that there is not one Fudge, but many. The whole idea of the system is to make it your own. So it’s more than likely that your Fudge game is totally different from mine, even though it’s still Fudge. That’s probably the reason why there’s a certain hurdle to overcome when you want to get into Fudge, but if you get over this obstacle, you quickly see what Fudge has to offer. The system is extremely versatile, and as lightweight or heavyweight as you want.

Does this mean I will now exclusively use Fudge? No, of course not. But I’ll definitely use it more often in the future especially when I want to run a game inspired by computer or video games. Both the XCOM and the Fallout games worked like a charm and I don’t think things would have been as easy with most other games.