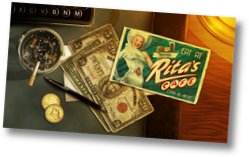 Last Friday I ran the first session of the Fallout Fudged game I wrote about. Character creation was pretty fast even though I had to translate a couple of terms for one of my players. The party consisted of a Albert, a good-natured Science guy, and his childhood friend Ares, who prefers fists to words when it comes to conflict solution.

My heavily-modified Fudge rule set worked pretty well, but I did some last minute changes to how character advancement works. In an earlier draft Fudge Points were also used to raise character skills and buy perks, but I changed it so that Fudge Points are only used during the game, while Experience Points can be used to improve one’s character. This change made sure that the players actually used their Fudge Points properly and didn’t save them for later. 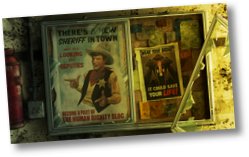 Combats were fast and pretty lethal, but it still took them a while to take down the Rad Scorpions in the cave near Shady Sands. At the end of our first session they reached Junktown, spoke with Killian Darkwater, dealt with the assassin sent by Gizmo and managed to place a bug in Gizmo’s office. The next session will start off with Killian, the player characters, and a few guardsmen trying to arrest Gizmo. But I fear this might turn into another bloodshed. 😉

The players and I had a lot of fun. Even though we are all pretty new to Fudge, things went pretty smoothly. The rules never got into the way and the players really managed to immerse themselves into the game world. After the game the players told me that they had a blast and they can’t wait to see how things will progress. Hopefully we’ll be able to schedule another session soon.

In the title of the post I mentioned anxiety. For a long time I wasn’t able to run anything. Probably because of the depressive episode I had earlier this year, my confidence as a GM was totally shattered and I felt extremely anxious whenever I planned to run a game. But now I feel that my confidence is slowly coming back. I guess it might take a while until things are back to “normal” but at least my life is turning into the right direction again.