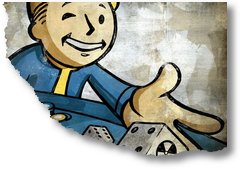 A while ago I had the idea to run a campaign based on the Fallout computer game series. I was actually just replaying the original Fallout computer game when I realized that it should be very easy to use the story of the game for a pen & paper campaign. The story is non-linear, quite interesting and has a good mix of combat, exploration, and hard decisions.

Since I wanted to keep the prep to a minimum I searched the internet for other people’s conversions. I quickly discovered both a conversion for Savage Worlds and one for GURPS but both weren’t what I was looking for. So I turned to Fudge, which I had been running with some success just recently. Alas I wasn’t able to find a Fallout-to-Fudge conversion anywhere, so I had to start working on my own.

Fudge is perfectly suited for such a task, since you can just use the attributes and skills from your source material. One of the mechanical aspects that make Fallout unique are the Traits and Perks. Traits are basically character backgrounds which are both a gift and fault at the same time. At first I thought about just using Fudge’s Gifts and Faults system, but then I decided to convert the Traits to Fudge. Here’s one example of what I came up with:

Fast Shot. You can shoot much faster than your fellow men, but at a price. You can fire an additional pistol or rifle during your combat turn without penalty, but all your weapons cause -1 damage.

Perks in Fallout work a lot like Feats in D&D 3.5 or Pathfinder. They either grant a bonus to certain actions or they allow the character to perform certian actions which are unavailable without the Perk. In Fallout you get a new Perk every few levels, but Fudge doesn’t use experience levels of any kind. So I decided that characters are allowed to buy Perks with experience points. This should be close enough to Fallout without moving away too far from the Fudge rules.

Converting weapons and armor were pretty easy with Fudge. I made things easier for me by not converting every weapon we’ve seen in the existing Fallout games but only picked a couple of iconic ones, like the 10mm Pistol. I am pretty sure that the balancing between weapons and armor is still a bit off, but I can easily fix that during play. Here’s an example of one of the weapons I created for my conversion:

My players and I are currently trying to schedule a first session for character creation and perhaps even to start playing. Within one session they should easily be able to get to Shady Sands or perhaps even start exploring Vault 15. I have no idea how long the whole campaign will be, but I am hoping to get a dozen or so enjoyable evenings out of the story of Fallout 1. Currently I am still finishing the bestiary and working on some notes for the actual campaign. As soon as the bestiary is done, I might actually release my notes to the public. So stay tuned. If you have any questions regarding my conversion, please feel free to comment below.