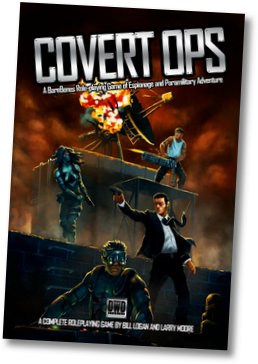 It’s no secret that I love rules-light roleplaying games. I also have a soft spot for d% mechanics, so it’s no surprise I fell in love with DwD Studios’ Barebones Fantasy. Just 84 pages long, BBF was definitely among my favorite games of 2012.

A couple of days ago I was provided with a playtest copy of DwD Studios’ new game: Covert Ops. From what I was told this copy is pretty close to what the final version will look like, but expect a couple of minor changes. For example the back cover and the index were still missing in my copy, but the placeholders indicate that both will be added in the final release.

But even in this version Covert Ops looks great. The cover and interior artwork fits the genre perfectly and the layout is very clear and good to read. It’s a joy leafing through Covert Ops’ 104 pages. I can’t wait for the print version to be released!

Like BBF Covert Ops uses the excellent d00-Lite System and if you’re familiar with BBF you can basically start playing Covert Ops right away. Of course some changes have been made to make the system fit the genre better. Like BBF Covert Ops uses iconic genre archetypes as skills. So instead of having a Soldier class, you get a Soldier skill that allows you to perform anything a soldier does. The other skills are Academic, Detective, Leader, Martial Artist, Medic, Pilot, Scout, Technician, and Thief.

Character creation is fast and pretty straightforward. You begin by rolling on the background table. The result determines what your character has done before joining the secret agency he or she is now working for. After that you randomly generate your character’s abilities (or pick the pregenerated ones), select your character’s skills. Like in BBF each character has one beneficial and one hindering descriptor. Last but not least you choose the character’s moral code. If you’ve played BBF before you should feel right at home.

What positively surprised me is how much stuff Bill Logan and Larry Moore managed to squeeze into such a small book. The equipment list has everything a secret agent can dream of including vehicles and rules for modifying them. There’s a whole new system for Martial Arts that allows players to pick from a list of over 30 special maneuvers. Examples are Insanely cool moves, which allows the character to look impressive to onlookers (yes, this is an important ability!), and Vivacity which allows the character to use DEX instead of STR for their martial arts score. In general the combat rules have been expanded to accommodate the needs of the genre without bloating up the rules. There’s are also sections on security systems and traps, and a very cool system to create Master Villains and enemy organization. And if you want to create a HQ for your party, Covert Ops has you covered. Last but not least there’s an extensive Mission Generation system and a brushstroke campaign setting for you to use. There’s even a glossary which contains useful information on the world of espionage.

If you are a fan of the espionage genre you should definitely check Covert Ops out. But even if you’re not interested in the exploits of secret agents you can make good use of this game. Even though there’s a focus on espionage, you can basically use Covert Ops for any game set in the modern world (think of mid-20th-century to today, perhaps even the near future). If you’re interested in spicing things up with a some paranormal elements you can probably just add spellcasting from Barebones Fantasy. Even a cyberpunk or SF game should be possible with some minor adjustments. The d00-Lite system looks very flexible and very hard to break, but I have to admit I haven’t really tried yet. If I had Covert Ops earlier I might even have used it for my XCOM-inspired game.

So is there anything I don’t like about Covert Ops? Not really. At first I thought an extensive list of ready-to-use NPCs would have been a nice touch, but then I realized how easy you can create unnamed NPCs in the d00-Lite system. In my opinion Covert Ops is pretty close to perfect if you like both the genre and rules-light games.

Barebones Fantasy was one of my favorite fantasy games of 2012 and I am pretty sure that Covert Ops is at least as good if not better. Now I dare DwD Studios’ to write the d00-Lite SF game I’ve been dreaming about for a while. 😉

What’s New With The Stargazer?