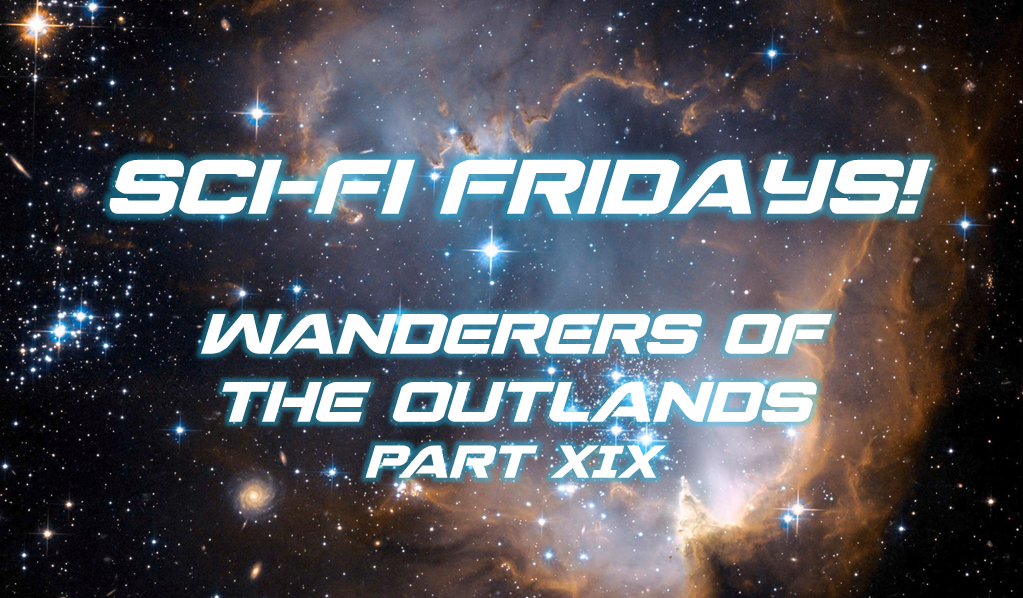 Dear readers, thank you so much for reading this LONG series covering my current Savage Worlds sci-fi campaign. With this post I’ll share the last bit of prep I did for the campaign before it started, a little piece of fiction meant as a prelude to our first session. To get all the references you should check out Part XV of the series, where I introduced the ship’s NPCs, and Part XIII and XIV since this prelude closes that loop and brings the action to the players.

We may come to the end of the prep materials, but the series is not done yet. Next week I’ll share with you some forms and sheets I use or adapted for the campaign, and I asked my players if they would be OK with me sharing the character intros they wrote. I have some awesome players and they all went out of their way to write introductions to for their characters. If they say yes that will be the post in two weeks.

And even then, Sci-Fi Fridays! won’t go away. I plan to keep the weekly column alive and tackle some other sci-fi rpg topics. So if you have any suggestions, make sure you send them my way! 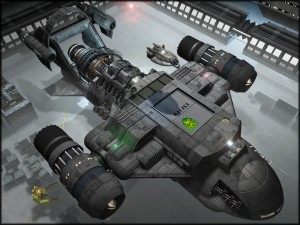 The voice over the ship’s comm system was cool and collected.

“Exeter, your transponder code has been corroborated, you are clear for docking. Proceed to Berth 9.”

Cas looked out the bridge viewport as the Montebello Way Station grew larger and larger. Brandon was sitting on the helm station guiding the lady on her approach. “Take her in my boy, easy does it.” Eli propped her feet on the sensors station console and leaned back smiling at her grandfather.

The comm system squawked startling all three of them for a moment.

“EXETER SLAVE YOUR DEFENSE SYSTEMS TO THE STATION’S MIANFRAME FOR FINAL APPROACH.”

Eli righted herself in the chair and killed the outgoing comm channel. Cas pointed at her and said, “Activate the subroutine Index installed before establishing a connection. I like to keep my options open!” The old man winked and made a clicking sound while pointing at his granddaughter, his finger simulating a gun. “Dock her and meet me in Cargo deck.”

Cas left the bridge and crossed the conference room and auxiliary cargo hold on his way to the crew’s quarters. He lovingly caressed the ducts running along the ceiling and the plastisteel walls. The Exeter had been a beauty once, but over the 45 years since it left the shipyards it had, well for lack of a better word changed.

An update to the life support system had sent auxiliary ducks snaking all over the old lady, and the pastisteel access ports to the service areas didn’t always match in color or appearance. The ship felt, and smelled, lived in. But to Cas it was home. Index did her darn best to keep her running, and she was far better at it than the last engineer, and she was only a kid. She’d go places!

Cas smiled satisfied whenever he thought of the girl, short and covered in grease, and so talented, the opposite of the tall man child before him. Tiny was struggling to cover himself with a woefully small towel. Andrew’s brother was tall, taller than Cas, and incredibly strong, but his unfocused stare, always avoiding direct eye contact, the slack jaw and constant smile made it clear he was not playing with a full deck.

“Cover yourself Tiny, there are ladies on board, got to be modest.” Tiny tried to salute comically almost letting go of the towel and then quickly struggling to keep it in place, “Yes Sir Captain Cas, Sir. Modesty first, and that’s what papa always said.” Tiny ducked into the cabin he shared with his brother and Cas leaned on the shower’s door while knocking. Loud enough to be heard over the running water he yelled, “Andrew, you better not use up all the recycled water. Get yourself dried up and meet me in the cargo hold.”

Bob was having a bite in the crew lounge as Cas came by, “Bob, be as kind as to run up to the utility room and get Index. She’s got to go and get some replacement parts out in the station. You go along with them. Thanks…” Without waiting for a reply the captain walked down the stairs. Before he got to the lower deck he could hear Aerton practicing in the passenger’s lounge. Cas loved old earth music, the classics, and his music reminded him of it. Raw, real, nothing like the safe synthetic stuff popular these days. Eli had brought him onboard as a passenger, he wasn’t sure where his final destination was, but that was not a first on the Exeter.

Aerton looked up at him and stopped for a moment, Cas smiled. “As much as the crew likes your music, it will soon not be just you and Adham on this deck. We’re picking up three passengers.” He was about to continued down to the cargo deck when he stopped and looked back at the musician from the stairs, “You asked when we would stop at a major Way Station; this is most likely the biggest one we’ll hit for a while. If you are going out, you can tag along in the field trip.”

The crew and single passenger gathered around him on the cargo deck, Cas sat on one of the cargo boxes to see them all.  They all looked eager and ready for a chance to step out of the ship after all almost twelve days in transit. “Ok guys and gals, here is the deal. We’re at the Montebello Way Sation in orbit around Renghem. The Heremod system is going through a strike; tensions are high between strikers and UCTA. Security is tight, full scans, no weapons or obvious armor on board Montebello. Let’s keep it tight, we go in, we go out, and don’t get involved. Andrew and Bob, escort Index to get some supplies she needs and then escort Eli and Brandon to pick up our new passengers. Aerton is tagging along to get to a Grid station, make sure he’s safe.  Just like that time the liner got boarded by pirates and the amazing Harry Takayama and I managed to stay out of it by locking ourselves in the supplies compartment. We must have gained a couple of pounds…”

The story went on for a couple of minutes ultil the warning klaxon informed them there was atmospheric integrity in the berth outside the ship. “Ok boys and girls, don’t let me keep you. I’ll be here with Tiny and MAC unloading this cargo.” He banged on the boxes. “Go, shoo, get out of here!” As the bay airlock doors opened and the outside doors lowered down to form a ramp, Cas grabbed Brandon by his elbow and whispered, “Make sure Eli stays out of trouble. Andrew just let’s her do as she pleases.” He watched his crew and passenger walk away as his client scampered onboard to gather their cargo. Nothing big, this would barely cover the parts Index was getting. Cas sighed, he needed a bigger job. Something to put them out of the red…

Kosima eyed the room. Spacer’s Rest bar was filled with patrons, an odd bunch. Striking dockworkers restless from the week’s long strike and off duty UCTA agents and UAF soldiers; it seemed as if the drama being played out in the Heremod system was playing out in a smaller scale inside the bar.

The workers gathered and simmered in the tables while the Union men crowded around the bar. Kosima’s training kept her on the edge. She wished she had her gun with her. Katja elbowed her way out of the bar and sat at the table three drinks in hand.

Katja could see her sister’s worry written all over her face and smiled, “Don’t worry Kosima, there is nothing to worry about.” She pushed one drink toward Asha with a curt, almost imperceptible bow of the head, “Shai…” Kosima gestured she didn’t want one, and Katja smiled, “These two are for me, you don’t get any you teetotaler. If I’m about to go into t-space soon I need all the drinks I can get.” Katja downed one of the drinks in one swing and slammed the glass on the table and cheered as the winning goal was scored in the zero-g ōllamaliztli vid showing in the screens behind the bar.

Kosima scoffed, she leaned towards Asha and whispered “Sorry my lady, I hope she didn’t startle you”. More forcefully she reproached he sister, “By the will of the Nameless Katja, will you stop this! It is bad enough our weapons and possessions are in storage, and that this ship’s captain insists we meet in this place. Fulfill your oath and stand guard for the Nabí”

Katja’s smile vanished and she pouted, looking at Kosima with disapproval shared only by siblings. Kosima wondered silently how her twin could be so unlike her. They should be here soon, and the Nabí would be away from danger and on her way to fulfill her destiny.

The cargo unloaded, the crew and passengers still not back, Cas enjoyed a moment of solitude in the Exeter’s bridge. He could hear the retrofit team working outside the ship. Somewhere in the aft of the main deck Tiny was singing some unintelligible song, the acoustics inside the Exeter carried it through the deck to the bridge. Soon this all would be done and the Exeter would be off, with three additional passengers. Paid for, but not enough to keep them flying for long… Short on cash and with no prospect for work Cas grew restless. He was getting to old for this.

The comm system chimed, Cas looked down at the screen, an in-system communication, from the planet. Cas cleared his throat, “This is the Exeter.” A familiar voice came over the comm.

“Cas, this is Blackjack. I have a business proposition for you!”

That’s all this week… If you are in Puerto Rico, I’ll be at the Puerto Rico Comic Con, with the Puerto Rico Role Players folk doing gaming demos. We were invited by Gaming Zone in Bayamón to be part of their gaming area. If you come to the con be sure to drop by and say hi. See you all next week.