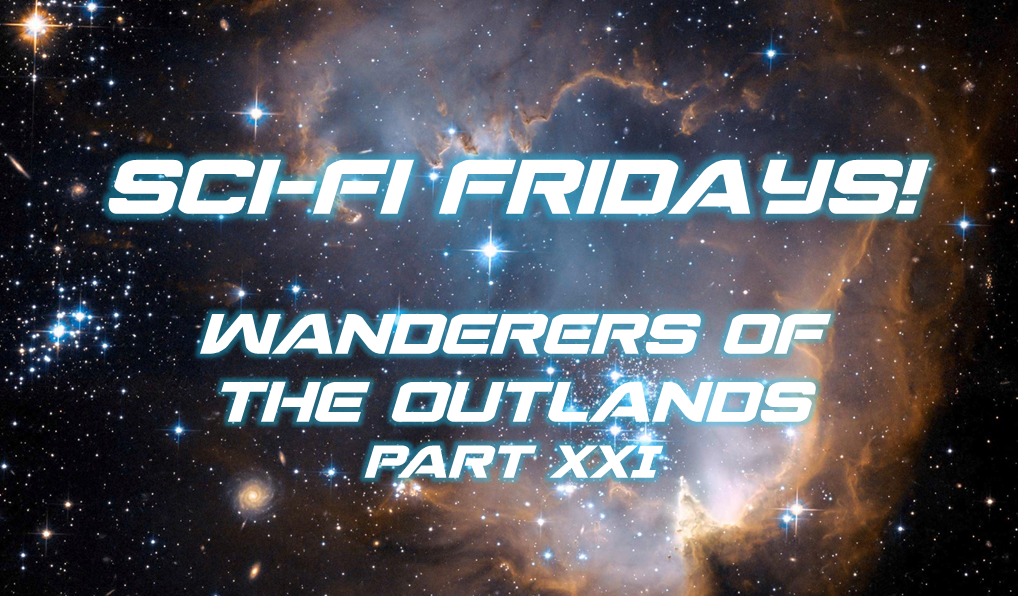 Of all the Sci-Fi Fridays! posts, this is the easiest one to write, since it was written for me. As part of the preparation for my Savage Worlds sci-fi campaign, about which you’ve been reading the background materials and house rules over the past 20 weeks, I asked the players to write introductions to their characters.  I typically give out bonus Experience Points before the campaign begins for things such as these, and this time around was no exception. They could earn bonus Experience Points for drawing or finding character portraits, finding a miniature, writing a background, all in all if they did everything they would get 5 XP and their first Advancement (in Savage Worlds terms) before the game commenced. Needless to say, every player did it!

Besides the campaign survey, which I had handed out months ago as I sat down to prepare the campaign, as to make sure my preparations met their likes and expectations, I also asked them for a little list before the game began. I called it the List of 9. I wanted them to list 3 plots they would like to play, 3 goals their character had, and 3 enemies they’d like to face. No further instructions. Some players gave me general one or two word answers, others wrote paragraphs for each. That was ok, I wanted an idea, a baseline to know what they would like to play as we began the game.

I have said it before, but it’s worth repeating, I’ve been incredibly lucky to game with some great people, now and in the past. I’ve had great friendships forged around the game table, and to find players that commit and actively participate in telling a story. My current group is no exception. All of my players wrote introductions to the characters that really fired my imagination and offered me many plots and ideas. I would LOVE to share all of them with you, alas, some of the stories reveal a lot about the character’s story, some of which their fellow players are not yet aware of.

I considered editing some of them but if I take too much out, they might not make sense. So I choose two of the background stories that don’t reveal too much of the character’s secrets to share with you. This is NOT a commentary on the quality of the materials written by the other players, it’s just  matter of keeping their secrets, I’m sure they will understand.

Just a quick note, besides the ship’s NPCs the PCs are, AJ, the head of security played by Carlos; Bob a man escaping his past, also working security and played by Edgardo; Brandon the ships pilot, Fernando’s character; Hector plays Aerton a passenger who is a musician and a rebel; Index, the ship’s engineer, a teenager prodigy played by Luis Lao, and finally Asha, Sara’s character, member of a religions with ancient origins, and her two companions Kosima and Katja (both NPCs).

We begin with something a link to a document Sara Robles wrote for Asha’s background, written as a scholarly work about the Order of the Five

THE ORDER OF THE FIVE by Danielle Wu-Hassan

Next is what Luis Lao wrote for his character Index. A series of vignettes about his character’s history and her life with the rest of the crew:

“You know it; bring in your credits and a bottle of that distilled rum you make.” A.J. smiled. “And please Index; eat before the game, last time you made a fool of yourself.

“Yeah, alcohol and me, we are like oil and water.” Index smiled timidly.

A.J. walked away, placed one of his guns in the weapon’s locker and went to his quarters. Index opened a pack of strawberry bubblegum and walked away savoring the sweetness of the gum’s artificial flavor. Her mind was already working, making strategies for the poker game, solving the problem of the Ion Displacement unit, remembering that the starboard fuel line needed to be replaced soon and thinking about the three layer chocolate cake she baked that morning. She grinned, a three layer chocolate cake, made from real cocoa and it was all hers. An almost malefic laugh escaped her and she strolled back to the engine room. Index was a happy girl. But it was not always like this.

The street was packed, it was the night of the biggest concert of the decade and Aria was really excited. The lights on the streets, the mass of vehicle and the smell of sweat and alcohol were just overwhelming. Aria moved as fast as the crowd would let her, the concert hall was roughly a couple of miles away; she turned to face Dina and grinned excitedly.

Dina was a slum girl who befriended and helped Aria when she disembarked The Sunglar, a very fast smugglers ship. Dina kept Aria out of trouble, sometimes thinking that the outlander was just stupid for lacking any kind of street smarts, but there were times when Index just hacked into a local Cred and Go, refilling a stolen cred-stick and feeding them for weeks. She knew that Aria was a wanted girl, Aria said it herself but she was her friend and for the time being they were happy, going to a Sandstorm Concert. It was then that Aria was stabbed for the first time in her life.

The wound was an inch below her belly button, blood oozed down like a crimson river, her white shirt quickly turning red. Aria stepped back and saw the man that stabbed her. She recognized the man, his cyber-eyes were unique, they were tri-reticule cybernetic eyes, model E-2289. Why was she thinking about what the eye models were at a time like this? She was stabbed one more time, this time his blade pierced her left superior pectoral muscle. The blade felt hot, very hot. Aria screamed, and backed away, but the crowd forced her towards the assailant. The young woman lifted her left arm, in an attempt to protect her face from the incredibly hot knife; the blade tore bone, muscles and ligaments alike as the man slashed her three times. Aria Screamed again and the crowd began to give her room to move. Dina reacted swiftly; she stabbed the man with a knife of her own. Her blade found a very soft spot right between two of his ribs, puncturing the man’s spleen. Dina grabbed a stunned Aria by her right arm and pushed her way through the mob.

“It is impossible to heal her, this wound; I have never seen wounds like this. I think the girl will need a cybernetic replacement.” Leng Gallo said.

Dina swallowed hard, “she can pay.”

The man turned around, and looked at Aria.

“She stole money from a Cred and Go; I saw it, she made it look easy. I am sure she can pay you back, as soon as she recovers.”

“If she doesn’t deliver little Dina, I will sell your organs in the black market. Understood?”

“Frank, why aren’t you talking to me? Why are you ignoring me? Tell me what is going on. Please.” Index looked at Frank, expecting an answer that would not come; she always treated him with respect, and love. So naturally Index was upset that he was not talking to her. “Are you angry because I flirted with Sam? Is that it? Sam means nothing to me. He is not even half the engine you are my big and handsome Frank.” Yeah, Index had a very colorful imagination. That scared some of the crewmembers of the ship, but everyone knew that she was harmless. “Do I have to drop on my knees and ask for forgiveness? Frank, you suck. Wait, you don’t suck that much, Bertha, now that is a sucky engine” She knelt in front of the huge roaring engine and from that angle she saw the problem.

She walked towards the computer and said, “My dear captain, we need to buy, slash get, slash loot a Packard Nanometric Valve. Frank is sick and in dire need of one. If we don’t get it I can try to create one from the old Geostatic Capacitor from old Bertha. Please let me know because things can go boom if we don’t do anything.”

“Do you think it can hold until we get to New Cartago?”

“I can probably fix it boss, but the ship will be adrift for a couple of hours.”

“Oki doki,” Index said while turning towards the huge engine. “Well Mr. Frank, it is time for us to get intimate again.” She laughed wickedly.

I’ll leave you with those two for now. Let me again publicly thank Carlos, Edgardo, Fernando, Hector, Luis Lao and Sara for their character’s stories and for playing with me every week. You guys are the reason I run the game!

See you all next week…

My thoughts on “Chess is not an RPG”