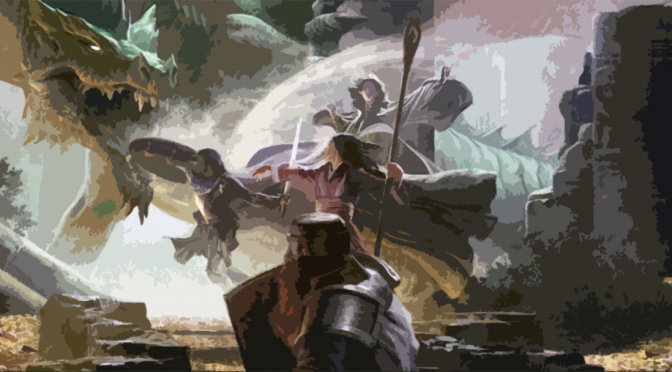 Last year I started playing D&D 5th Edition with one of my regular groups. Actually we just created characters and did a short introductory adventure set into a campaign setting of my own creation. Things went pretty well, everyone had a lot of fun and it was very easy to run D&D 5th Edition.

But my homebrew setting caused some issues. Initially I wanted to create an open sandbox for the characters to explore, but in the end things turned out differently. The frontier town turned into a metropolis and all the ideas I came up with were of the “save the world” variety. And the worst problem of all: it didn’t feel like D&D. I can’t really put my finger on it, but the setting just felt wrong.

My players didn’t mind changing the setting, since we just started, and I thought starting with “Lost Mine of Phandelver” would be a fun idea. Heck, I could even run them through the whole Tyranny of Dragons campaign.  So I did some research and found a lot of less than flattering reviews. Especially Hoard of the Dragon Queen seems to be pretty bad.

So while I can start with “Lost Mine of Phandelver” which will probably take us a couple of sessions, the question remains on how to continue. I could try to come up with my own adventures set into the Forgotten Realms. As an alternative I could get “Hoards” and try to fix and expand it if neccessary. Or at a last ressort I could always try to find a setting I feel more comfortable with – I am not a fan of the Forgotten Realms – and try to move the “Lost Mine” adventure to it.

One of the settings I’ve looked at is Bruce Heard’s Calidar. It definitely feels like D&D, has skyships and interplanetary travel – which is always a plus.  And from what I’ve seen the setting offers  huge amounts of adventure opportunities. I’m not sure if “Lost Mine” would easily fit into Calidar, because I haven’t read either book thoroughly yet. So what do you guys think? Shall I keep things simple and just run the WotC adventures – even if they need some fixing – or shall I pick another setting and shoehorn “Lost Mine” into it? Please share your thoughts below.

#GMwisdom, musings of a Game Master!

When in doubt, run a one-shot!

8 thoughts on “Musings of a D&D 5th Edition DM”