What I’ve dubbed the week of favorite continues on #RPGaDay2015 Challenge! I can hear the Stargazer struggling with his bonds in the basement, but I’m still running the ship around here… So on to the next topic:

To those who read yesterday’s post, did you guess? If you said Star Frontiers you are correct! 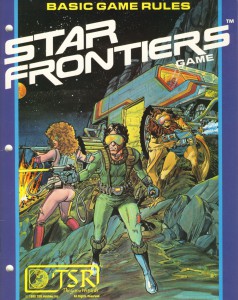 I’ve proclaimed my love for that game before, like here, and here. So I won’t repeat myself, needless to say click on the first of the previous two links if you want to look at the books yourself.

Like yesterday’s post I could list all the sci-fi media I enjoyed while growing up, Star Trek TOS (and later TNG) and Dr. Who (to me Tom Baker will always be my Doctor!) in Spanish when they were broadcast in local channels. There was a lot of Anime also translated to Spanish such as Star Blazers, Captain Harlock, G-Force, Mazinger Z, and Captain Future which Michael mentioned recently, among many others. My favorite Anime series was definitely Robotech. I also enjoyed Ulysses 31, and of course, the elephant in the room, an elephant from a long, long time ago in a galaxy far, far away, Star Wars! And I haven’t listed any of the books… 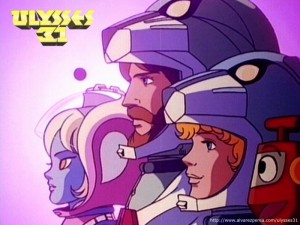 If you look at the sample above you can see the diverse types of sci-fi I grew up watching, classifying them into a catch all label is difficult, and thus choosing just one favorite sci-fi RPG is tough… So if I can digress a little and drill down to specifics, let’s break it down to my different favorite sci-fi games based on my incredibly arbitrary classifications.

Star Frontiers is a sentimental favorite, I played the heck out of that system. I don’t know if I would run it again as is… The Last Parsec by Pinnacle Games for Savage Worlds is a terrific spiritual successor. My favorite sci-fantasy game I’ve never played is Fading Suns. For “hard” sci-fi game, Traveller, I actually got on the bandwagon late with Mega Traveller, but I was just enthralled by the vast backstory. I’ve since collected the original books, the Mongoose and GURPS version and more.

As for my favorite post-apocalyptic game, Gamma World of course (with Rifts a close 2nd despite the system), mecha game, Robotech (again despite the system); there is so much goodness to be had in sci-fi gaming! And then if we mix my love of comics with sci-fi well you get my favorite team, the Legion of Super Heroes, but that’s a whole new ballgame and favorite supers rpg is the topic for tomorrow. See you then.

What’s your favorite sci-fi RPG? Let us know in the comments bellow…