Saturday once more, we’re almost done with week two, and today we touch on a topic near and dear to my heart, campaigns. It’s also a topic I’ve written about before here in the blog, and in Facebook and Twitter on occasion, but the subject keeps coming up in conversations with friends, so I think it’s worth reiterating.  Today’s #RPGaDay 2016 challenge question is:

August 13: What makes a successful campaign?

Most of you are probably know the KISS principle, it stands for: Keep It Simple Stupid. I first heard that from my 10th grade English teacher with relation to a writing assignment (Not too flattering calling your students stupid!), only learning later of the principle’s origin. I have my own version of it for what makes a campaign successful, the KICK! Principle.

KICK! stands for Keep It Consistent Kids! It sounds better than KICS, and I’d hate to call any of you stupid, you’re my kids. Simply put, for me, the secret of any successful campaign is consistency. Agreeing with your players in a time, place and frequency of play and sticking to it. That’s it. In my experience, that’s 75% of the work right there, the rest you can figure along the way. Crazy you say? Ok allow me to elaborate… 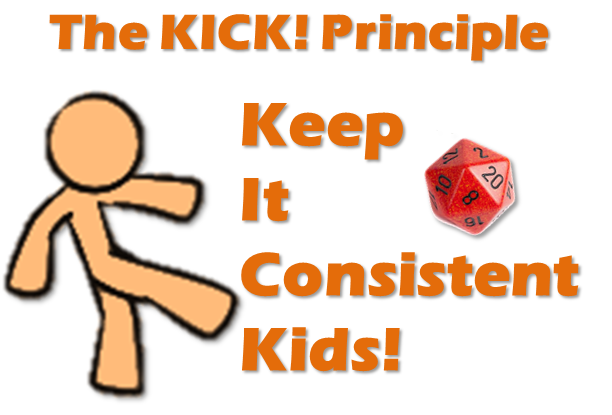 The premise for today’s topic in the official site offers the following description: “What things do you need to keep a game enjoyable and ‘good’ for the long term?” Notice that good is in single quotation marks in that last sentence, because what constitutes a good game is very subjective; some people crave immersive role playing, others tactical combat, and more often than not, in any group there will be varied and sometimes clashing expectations. Game Masters have to balance their player’s wants, needs and expectations to make that game, for that particular group dynamic, enjoyable to those participants session after session. But for that juggling act to even occur there has to be a campaign to begin with!

Allow me to quote the opening summary to the Campaign (role-playing games) entry from Wikipedia:

“In role-playing games, a campaign is a continuing storyline or set of adventures, typically involving the same characters. The purpose of the continuing storyline is to introduce a further aspect into the game: that of development, improvement, and growth (or degeneration) of the characters. In a campaign, a single session becomes a scene or an act within an overall story arc. At its inception, a campaign may or may not have a defined conclusion. A campaign by definition spans more than one session of play. Certain aspects of the game are nearly always constant throughout a campaign: the setting, the players, and the gamemaster. The gamemaster for a campaign is said to run the campaign.”

If we take the above definition as valid, not everyone wants to play a campaign, and that’s ok. Campaign length varies between groups, and the expectations of all participants should be taken into consideration when determining how long a campaign should last. Role Playing Tips has an excellent post on how to determine campaign length; I encourage you to read it.  I typically run long campaigns; lasting anywhere from a year and a half to four years, and my homebrewed campaign setting was created in 1987 and has existed in its current version since 1993. I’ve been lucky enough to always have players at my table, rarely do we have an empty chair, on the contrary, I’ve had to turn people away (something I hate doing) because as a group we’ve decided to have no more than 8 players for practical reasons. People have asked me, “How do you do it, is it the immersive world, and the mastery of the GM’s craft?” I wish! It’s all in the principle, Keep It Consistent Kids!

I run a weekly campaign, we meet during weeknight (currently Tuesdays but it has changed through the years) and play for an average of four and a half hours. I prefer weeknights, despite the hassle of having to work the next day, because weekends always get complicated, that’s usually the time you have to spend with your family. While I’ve been playing role playing games since 1986, the one night a week schedule has been running since 1993. For me game night is sacred! I rarely cancel, and try to do anything within my power not to skip a session. Real life happens, work, vacations, emergencies, but I try my hardest not to cancel. If I have to cancel, then we attempt to reschedule for another evening in the same week. I inform players with ample time before the session, as to be respectful of their time. When it happens last minute, and it inevitably will, I let them know ASAP and I’m very clear that we’re not playing. Worse to keep people waiting or unsure whether the game will happen or not, that just fosters resentment and breaks the first, and only rule, be consistent!

If players are absent, we play, either they are away from the action or someone runs them as an NPC, depending on how the absent player feels about it. I’m not heartless, if a player lets me know he or she will miss the session I plan accordingly, if a majority of players will be out and we can make arrangements to get together and play a board game or a one shot of another game, I’m amicable to the idea, but not for longer than two or three sessions. To me it’s all about the consistency, and that builds momentum. Allow me to put aside the personal examples and explain with greater detail.

It’s tempting to cancel a game; there are myriad reasons to do so. You may feel you’re not totally prepared, there might me some anxiety at running the game. Perhaps you feel you don’t master the rules fully. Someone is not coming to the game and you prepared the adventure just with their character’s skill set in mind. Maybe the last session didn’t go as planned and you’re feeling frustrated because of it. Mayhap you think, or your players outright told you, no one had fun last session! As the Game Master you’re ultimately responsible for getting the game going. It’s not solely your game, it’s a group effort, but you’re the facilitator, you get the ball rolling. If you call it off regularly, people lose interest, there is no game, and soon there is no campaign at all.

All of the above problems can be overcome, rules are learned through play. You’ll make mistakes, own them and move on. Don’t dwell on the less than stellar session, no one will remember it in two or three weeks once they’ve killed the BBEG and received their reward. Learn to improvise, it’s hard at first but you’ll get better with practice, stick to what you know, resist the urge to call of the game. You may not be the perfect GM, but practice makes perfect and, how can you get any practice unless you play? In my experience we GMs are often harder on ourselves than out players are. Don’t get discouraged, not everybody is willing to run a game, your players appreciate what you’re doing for them.

To summarize the KICK! Principle:

Treat this time as sacrosanct; make it an appointment in your calendar!

Do everything within your power to NOT to cancel the game.

Things will go wrong, don’t dwell on them, and move on!

Players will drop off! Turnover is to be expected.

Don’t let them forget you…

See, simple! Ok so there might be some complexity and a ton-load of advice behind the KICK! Principle, but you get the idea. Set a schedule, stick to it, and, to paraphrase that famous and often misquoted line from Field of Dreams… If you run the game, they will come! 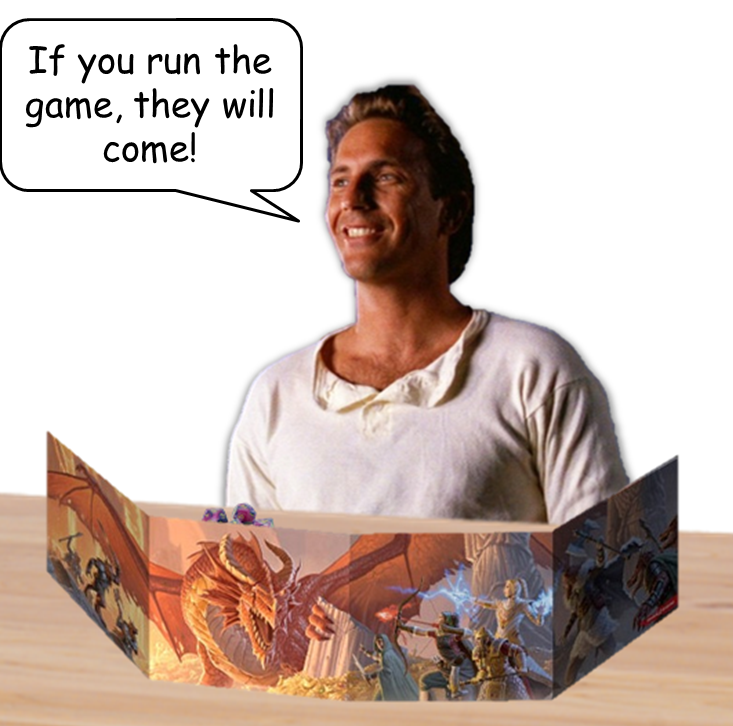 That’s all for today, forgive me for the extra-long post. Do you agree with my advice? Disagree? What makes a good campaign for you? Let us know in the comments. I’ll try to be more succinct tomorrow! See you them.