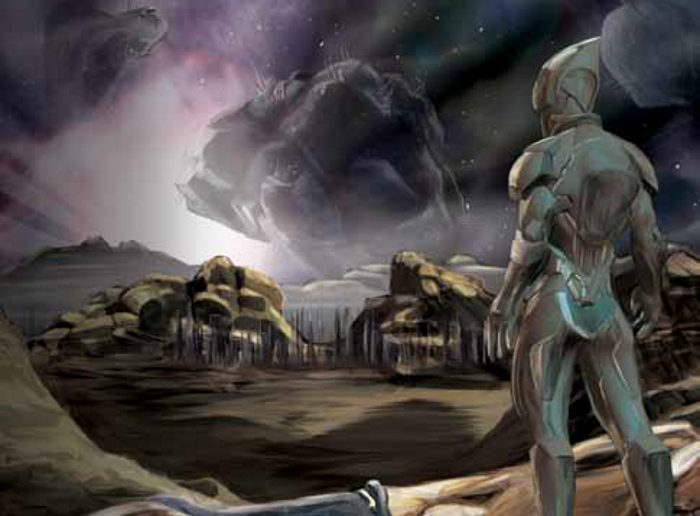 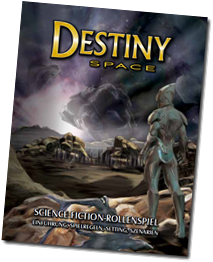 Most of the roleplaying games I write about are from the English-speaking part of the world. But sometimes there are German-language roleplaying games which really stand out, so I want to talk about them as well. I think the last time I did this, it was about Dungeonslayers – which I eventually translated into English.

This time I want to share some thoughts on Destiny Space, an indie Sci-Fi roleplaying game by Ace of Dice, an Austria-based publisher. Destiny Space is available digitally (there’s even a free version) and as a softcover book. On 84 pages you get a complete rules-light rule set, a setting for you to play in, and an introductory adventure. I think it was my friend and fellow RPG blogger Marcus aka the Chaotic GM who first introduced me to the game.

So, what is Destiny Space all about? It’s a rules-light science fiction roleplaying which some pretty ingenious mechanics. Characters are described by a set of nine attributes which are all organized in a 3×3 pattern on the character sheet. The three columns are Archaik (Archaics) , Technik (Technology), Meta. The three lines are Intuition, Kinetic, and Ratio (in the sense of rationale or intellect). The combinations of one column and one line creates an attribute.  The column and line titles help the players and GM to easily find the most relevant attribute, which actually works pretty well at the game table. Archaik and Intuition for example are “Charisma & Empathie” (Charisma & Empathy), while Archaik and Kinetik combines to “Athletik & Nahkampf” (Athletics & Close Combat). Each attribute has a score between 11 and 66. These seem to be quite strange values until you realize that Destiny Space uses a d66-based core mechanic. To perform a check you pick the most relevant attribute and roll two d6 (which generate a number between 11 and 66). If the roll is equal or less than your attribute, you succeed.

There are no skills, no special abilities, only these nine attributes, which still manage to cover all aspects of a character. One of the attributes is the character’s Großes Talent (“great talent”) which allows the character to perform special feats by spending so-called Destiny points. How the great talent works is totally up to the player and the GM. A great talent in Meta & Intuition might be psionic abilities. A great talent in Athletics & Close Combat may describe the superhuman strength. If the player wants to perform a special action using their great talent, they describe what they want to do to the GM. The GM then decides if that’s a “helpful”, “effective”, or “dramatic” use of the talent. This rank then sets the DP cost and possible damage if the great talent is used to damage a target. I really hope you understand how it is supposed to work. It’s actually much easier than it sounds and works great at the game table … BUT …

There’s a huge BUT involved. You need players comfortable with a freeform playing style and a lot of active creativity. The game has not an awful lot of depth, which may turn away certain players and make it not necessarily suited for longer campaign. It definitely works great for one-shots and con games. 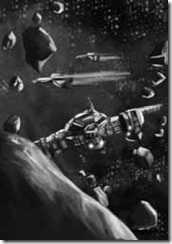 The setting is a bit of a mixed bag. It’s always great if such a lightweight game comes with a full setting and an introductory adventure. The adventure is actually pretty fun to play, but overall I am not too fond of the setting. The game is set into a swarm of comets, which are surrounded by a strange energy field and which races through the cosmos with light speed. Yeah. If you are into hard SF, you probably just started clenching your fists and crunching with your teeth. If you somehow got trapped in the swarm you can’t leave again, and so it’s filled with members of various alien races including humans. Because of the relatively small size of the swarm and the scarcity of resources there’s a lot of potential for conflict. I have to admit that limiting the scope of the campaign makes some sense, but the whole comet swarm concept makes my hair stand up. Fortunately you can just ignore the setting and either create your own, or use an existing one. The core rule book actually refers to space opera classics like Star Wars or Babylon 5 in its examples.

As far as I know there’s no English translation of Destiny Space yet. But if you have at least a basic grasp of the German language you should easily understand how the game is supposed to work. If you’re looking for a rules-light SF game with some neat mechanics, you definitely should check Destiny Space out!

A quick review of the D&D Character Builder