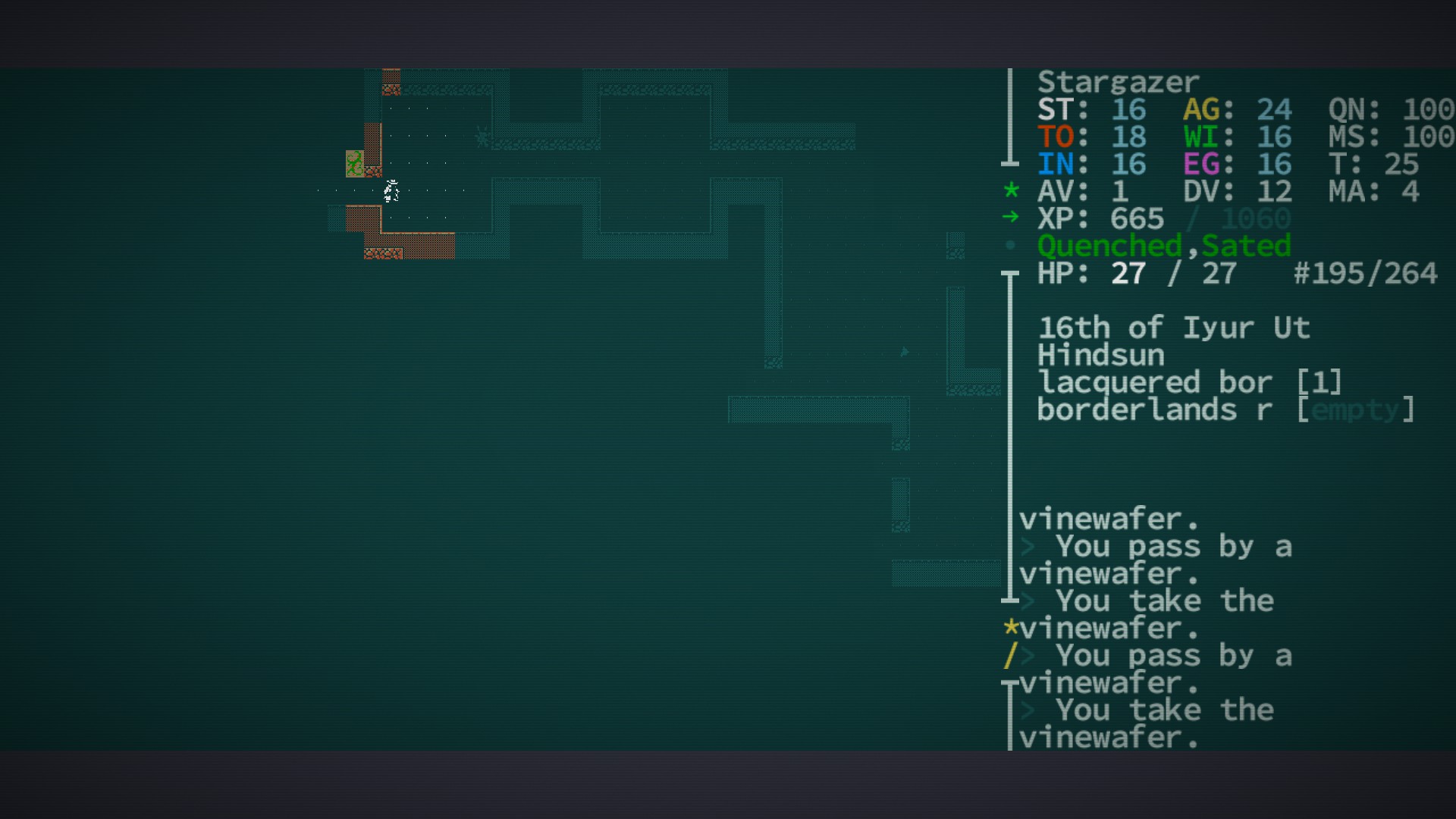 Yes, this is first and foremost a pen & paper roleplaying games blog, but sometimes I just need to sneak in a post about related topics. Today I want to talk about Caves of Qud, a very intriguing roguelike computer RPG, which I was interested in for quite some time now.

Roguelikes are games which are similar in gameplay to the original Rogue, which is – in a nutshell – an old-school dungeon crawl simulator. If you are familiar with the first editions of D&D you know what to expect: the game is quite lethal, there are countless monsters which are out to kill you, there are deep dungeons and countless treasures. Even though computers are now capable of almost lifelike graphics and sound, the classic roguelike genre with minimal graphics and turn-based action is still alive and well.

One of the more recent games in this particular genre is “Caves of Qud”, which is a game with a lot of depth and an intriguing world. The world presented in the game is set in a post-apocalyptic world. But from what I’ve seen so far, it’s no radioactive wasteland like in many other games of the genre, but it reminds me more of Monte Cook’s Numenera. You can either play a mutated human (and there are a lot of cool mutations to choose from) or a member of the true kin (which are – I guess – unmutated humans).

At the surface CoQ looks like any other roguelike, but after a couple minutes of play you realize that there’s more to it. One cool aspect is a very detailed skill system, which allows you to develop your character in any way you want. Currently I am playing a mutated human with the ability to regrow lost limbs and to suck the life force out of enemies who also happens to be a gunslinger. Just recently I acquired enough skill points to buy the Akimbo skill, which allows me to wield two pistols at once! I have started exploring some caves to the north of the starting village and already I have stumbled upon countless wondrous animals and plants.

There is a quest system and I already had a couple of interesting conversations with NPCs. It seems Caves of Qud is not just killing monsters and taking their stuff, but there’s also a story for you to follow. I have just started delving deeper into the game, so I can’t tell you that much about this aspect of the game though. But what I know is that the game is extremely addicting. I actually had to force myself to go to bed last night and that’s even though several of my characters died horrible (but unheroic) deaths. Being killed by some kind of snail is not the best way to go…

If you are looking for an exciting game with an interesting world and some old-school charm, you definitely should give Caves of Qud a try. It’s available on Steam for about €10 or you local equivalent. At the moment it’s on sale, so you get 10% off.

P.S.: There’s also a free version (which uses ASCII characters instead of graphical tiles). You can download it from here.

Superhero Campaign Questionnaire (and about the Virtual Book Club…)