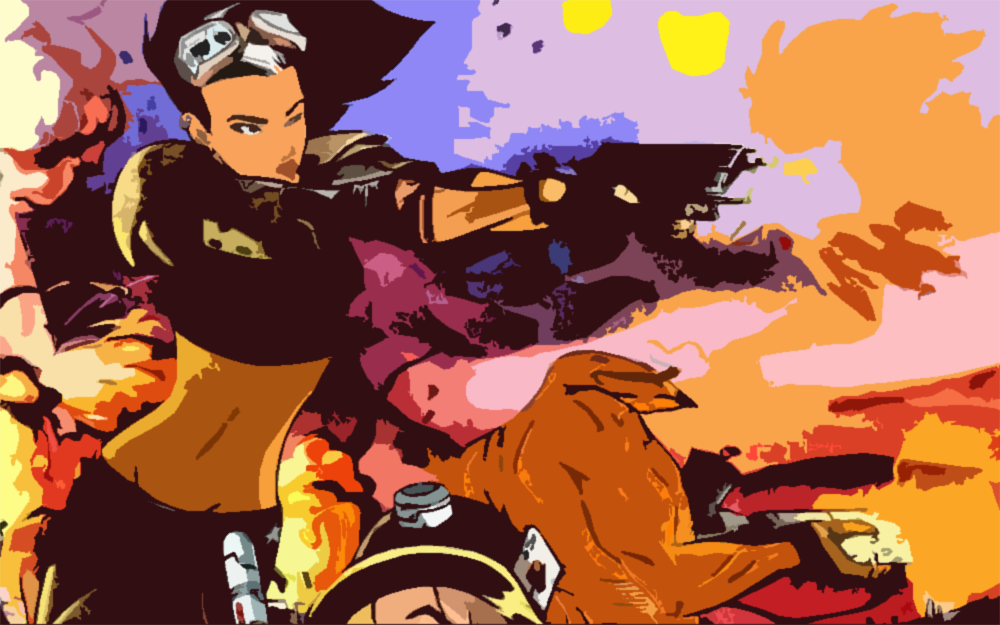 Last week we finally started our RIFTS campaign! Yay! While we all had a lot of fun, the Palladium managed to get into our way a couple of times. But let’s start from the beginning.

The group consists of four adventurers: a Mind Melter, a Ley Line Walker, a Combat Cyborg, and last but not least a Juicer. I could have made things easy for all of us by just declaring the player characters already know each other, but this time I wanted them to play out their first meeting.

When the game began the Combat Cyborg was escorting a truck caravan to a remote town somewhere near the ruins of Indianapolis. The town is called Sycamore (like the trees) and has made good profits in the past by supplying adventurers who wanted to explore the ruins or venture further into the Magic Zone. But recently a local gang has taken over the city and started taking slaves and killing locals who were not willing to pay the “protection fee”. Traders and other outsiders are usually not bothered because they bring in the money.

Before the Combat Cyborg and the caravan could enter town, they made a stop near the ruins where they stumbled upon the Ley Line Walker who was overjoyed to meet people to talk to after being in the wilderness for quite some time. The Cyborg grudingly agreed to let her join the caravan on the last leg of their journey.

Meanwhile the Juicer was enjoying herself in the town’s saloon playing darts. But for some weird reason the darts just didn’t want to hit their targets. She was even more baffled when she lost to some local boy. But then she noticed that said boy paid someone a sizeable amount of money before leaving the saloon. This someone was none other than the Mind Melter who had used his telekinetic abilities to mess with the Juicer. Luckily they resolved everything peacefully and ended up drinking together.

In the early morning the caravan reached Sycamore. The Cyborg and the Ley Line Walker went directly to the saloon in the hopes of getting a drink and perhaps a new job, when they realized that it was still closed. But there they ran into the other two future party members. Just as they left the saloon talking about how to make money in this god-forsaken town, they observed a ganger in MDC armor harassing a local trader. The Mind Melter used his abilities to coerce the ganger to leave the trader alone. In the conversation that followed they learned about the Bloodskullz, which were now running the town. Determined to end their reign of terror the player characters decided to meet with the gang’s leader in order to get onto his good side before making plans on how to drive them out.

The gang has set up their head quarters in the former townhall where the rotting remains of the former councilmen were still hanging from the balcony. They quickly realized that the gang was highly unorganized and most of the members were constantly drunk or on drugs. But because of their MD weaponry and armor the local populace was at their mercy. At the townhall they also met more people the gangers have taken as slaves. Unfortunately they all wore explosive collars which made it impossible to free them on the spot.

So they eventually met with Garrom, the leader of the Bloodskullz, and pretended that they wanted to join up. He was skeptical of the player characters’ motives so he sent them on a “quest” to prove themselves. The ruins of Indianapolis are supposedly haunted, and he wanted the adventurers to get to the bottom of this. So they packed some rations and left for the ruins of Indianapolis.

A while later they spotted dust clouds at the horizon which quickly turned out to be two Fury Beetles. During a short combat with these beasts the Mind Melter was trampled by one of the creatures but the player character’s combined firepower made short work of them. After the combat we decided to call it a day and scheduled the next session for Wednesday.

To my surprise the RIFTS system didn’t get into the way that often. A couple of times I was unable to find information I was looking for. There were several cases where the rules said that the information in question could be found in the OCC’s description, but unfortunately that was not the case. I guess that’s actually the main issue RIFTS has. It’s extremely badly organized.

What I like is that the characters are pretty competent – even at first level. Luckily the current party is pretty balanced (if there’s actually such a thing in RIFTS). All characters are quite powerful and can take quite a beating. They handled the two Fury Beetles quickly and noone’s armor got seriously damaged. I am curious to see how things will turn out when they run into their first Coalition States patrol…

I have to admit I didn’t have much of an adventure in mind when we started playing. I mostly relied on my improvisational skills which is sometimes a hit-or-miss thing, but luckily my players were enjoying themselves so much that noone complained. Hilarity ensued when the players started to dicuss the Combat Cyborg’s lack of genitals. But this is a story for another time…