Android: Shadow of the Beanstalk is a new and upcoming setting for FFG’s Genesys Roleplaying Game. Like Realms of Terrinoth it’s based on one of FFG’s preexisting IPs. While RoT was based on the fantasy setting explored in games like Runebound, Descent, or Runewars, this time we’ll get to visit the world of Android, and Android: Netrunner. It’s a near-future science fiction roleplaying game with cyberpunk and transhumanistic elements. And it’s the setting I’ve been waiting for ages now. 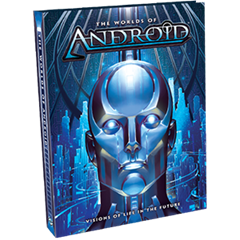 A while back they already released a coffee table book called The Worlds of Android, which gave an extensive overview of the setting, but lacked any game rules. I guess you could probably run a game set into the Android universe with the rules in the Genesys corebook alone, but more material is always welcome.

In the not so-distant future, humanity has spread across the solar system, unlocked the frontiers of cyberspace, and created millions of intelligent androids in its own image. At the heart of this progress stands a ladder leading to the riches of the stars—the massive space elevator called the Beanstalk. And at its base sprawls the biggest, meanest, and most exciting city on Earth: New Angeles.

The sourcebook’s 256 pages will include rules on character creation, new equipment and vehicles, game master advice, adversaries, and any information needed to successfully run a game set in New Angeles, the future Earth, or the solar system.

So why am I so excited about this? I love cyberpunk settings. Unfortunately most settings are deeply tied to the 1980s and often have a retro feel to them. This might have a certain charm, but sometimes you are looking for a more modern feel. Android definitely delivers on that front. I am also glad FFG decided to use their Genesys rules for an Android games. It’s easy to learn, simple and fast to run, but it has still enough depth for a long-time campaign.