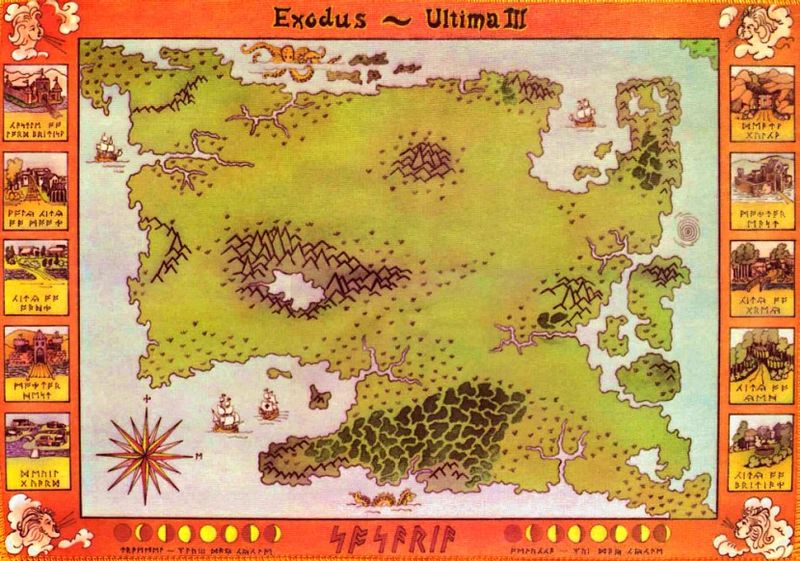 If you are even remotely interested in the Ultima series of computer roleplaying games and D&D you owe it to yourself to check out Michael Shorten’s excellent “The Siege Perilous” rules.

Back in 2009 he took Swords & Wizardry Whitebox to create his vision of a Ultima pen & paper roleplaying game loosely based on the first three games in the series. The Siege Perilous consists of a 46-paged core rulebook, a 54-paged GM’s guide, and a 10-paged gazetteer which unfortunately he never finished.

One thing that makes The Siege Perilous special is its interesting approach to classes. At character creation you can pick between the classes of Fighter, Magic-User, Cleric and Thief – quite standard so far. But at level three you can either stick to one of the base classes or switch to one of the advanced classes like the Alchemist, the Lark, or the Paladin. Sure, advanced classes like this are nothing new to D&D in general, but I haven’t seen the concept in OD&D-based games before.

The playable races in The Siege Perilous are pretty standard as well, which is no surprise since the Ultima series was originally based on the creator’s own D&D campaign, but how they work mechanically is quite different. Humans for example do get an Intelligence bonus in the early Ultima games and so is the case in Michael’s tabletop game.

Another change from D&D is that The Siege Perilous throws out Vancian magic and replaces it by a spell-point based magic system complete with Ultima-inspired spells. The deeper I delve into this game the more excited I am about it. The Siege Perilous combines two of my favorite things into a perfect blend.

Oh, by the way, did I mention that the rules also include space combat? No? The early Ultima games like many other CRPGs of that era often combined fantasy settings with SF elements. Ultima 2’s story for example heavily relied on time travel. In Ultima 1 you eventually got access to Scifi equipment like blaster weapons, aircars and even space shuttles. From how I understand things these artifacts are left-overs from an ancient civilization. Perhaps Sosaria is actually a post-apocalyptic setting.

Overall I think The Siege Perilous is a great example for a White Box-based game which tries to do something different. While it’s still D&D at its core, it’s also a totally different beast. I also think that some of the ideas of early computer roleplaying games can still be exciting to explore even today. So do yourself a favor, and check out The Siege Perilous!