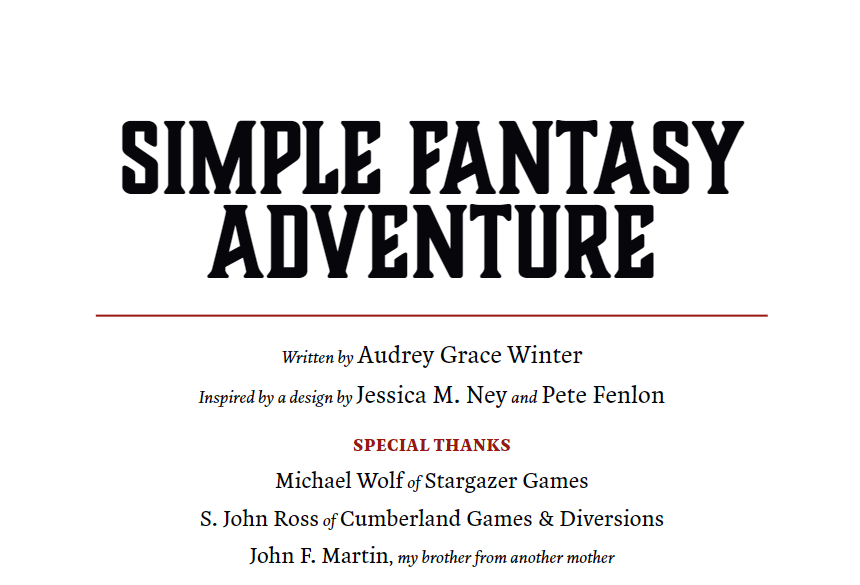 Retro-clones are all the rage nowadays but most of the games from that category are based on the grand-daddy of all RPGs: Dungeons & Dragons. Recently a few retro-clones of other games have appeared including Zweihänder which is heavily inspired by the original Warhammer Fantasy Roleplaying Game.

Today I want to write about Simple Fantasy Adventure by my friend Audrey Grace Winter. It’s a modern simulacrum of LOR, Iron Crown Enterprise’s “Lord of the Rings Adventure Game” which was itself a simplified version of MERP (Middle Earth Role Playing) which was based on Rolemaster. Since LOR was heavily steeped in Tolkien’s lore, Audrey decided to take out all the protected IP, and split the character archetypes into race and class which can be freely chosen by the players.

Simple Fantasy Adventure comes in the form of a very beautifully laid out, 18-paged, free PDF. Instead of the game it’s based on, it doesn’t come with its own setting, but is meant both as a modern recreation of this classic ruleset, as well as a simple generic system for use with your own world.

Character creation in SFA is a simple process of picking a race and a class. After that you get to distribute 6 points among your character’s Attribute (Strength, Dexterity, Intelligence, Wisdom, Speed) and Skill Characteristics (Physical, Subterfuge, Arcana, Melee, Ranged, Defense, and Vitality) within some restrictions. For example you can’t put any points into Vitality and only two among the Attributee.

The available races are humans, elves, halflings and dwarves. Each race gets a bonus and a penalty to differentiate it from the other races. From their descriptions and abilities the races definitely have a Tolkienesque feel which is probably no surprise given the fact that SFA is a clone of LOR.

The available classes are fighters, rogues, rangers and mages. Classes provide bonuses to skills and determine a character’s starting Vitality points. If you have played LOR in the past you may have noticed that SFA deviates from LOR in a couple of aspects, but these changes were mostly made to keep the lawyers at bay. Mechanically SFA and LOR are pretty close, but SFA has definitely a clearer presentation.

SFA’s standard task resolution mechanic is pretty simple. The GM sets a target number (like 4 for routine tasks, 8 for moderate ones, or 18 for truly epic feats), the player rolls 2d6 and adds the relevant characteristic. If the result is equal or higher than the target number, the character succeeds. Simple, but efficient.

SFA’s lineage back to Rolemaster shows in its Combat Chart. When attacking you take the attackers attack skill (Melee or Ranged), roll 2d6 and look up the result on the chart. A number denotes the amount of damage caused by the attack, while C or C+ are critical hits. A critical (C) causes your roll result plus 10 damage, while a “double critical” (C+) causes twice the damage of a regular critical.

SFA includes a small number of magic spells and GMs are encouraged to create their own. Unlike D&D’s Vancian magic, mages in SFA can cast as often as they like, but each spell causes Drain which is damage. So a mage can easily knock themselves out by casting too many spells. The spells included are also not as flashy as in other games (like D&D for example). This fits very well with the feel of the game its based on.

Even though SFA is only 18 pages long, it is a complete game with all rules needed to play, including an extensive bestiary, a handful of pre-generated characters, and a list of common equipment.

The big question remains: is it worth your time? In my opinion it is. It’s a rules-light game, written with new players in mind, and with an undeniable charm. It’s also totally free and released under a Creative Commons license, so you are allowed to create your own material based of SFA as long as you share your work freely under the same license. Regardless whether you’re looking for just a simple game to try out or if you’re actually a fan of the game SFA is based on, I recommend you give it a closer look. You won’t be disappointed!