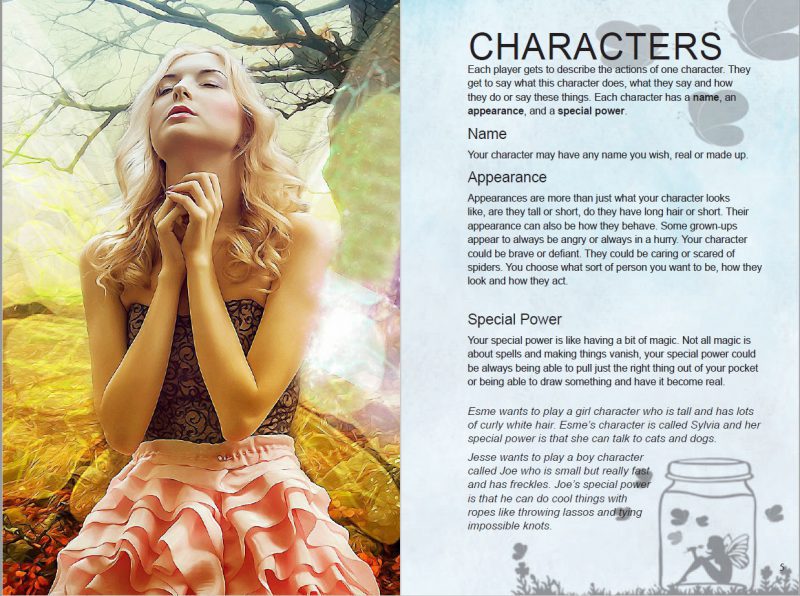 There are a few popular games for getting younger children into gaming. The most successful is probably Hero Kids by Justin Halliday, with Amazing Tales by Martin Lloyd coming in second. Both games are aiming at gamers as young as 4 years old, which is pretty impressive.

In December I was involved in some idle chatting on a discord server and we started talking about simple systems aimed at children. Before the evening was out we had roughed out a basic core mechanic and were adding in what amounts to feats, magic items, and monsters.

As these things do, it soon took on a life of its own and last night we released our own RPG. We think the target audience is in the 8 to 12 age group. It is a very long time since I have been 8 to 12 years old and those were simpler times, or so we like to tell ourselves.

The game is called The Things That Grown Ups Cannot See, or Things! for short. Right now it is in that nerve-wracking stage of trying to find playtesters.

If you know someone with children in that sort of age group and they are interested in RPGs they can grab Things! as a free download from DriveThruRPG.

The core concept of the game is that the player characters are living normal lives in today’s world, they go to school, they have Instagram accounts and mobile phones. They are also special in that they can see, the fey world, the things that grown-ups don’t seem to see.

The style of play is very much narrative. There is an in-game meta currency called Power and when a play spends a Power Point they get to take over the narrative until the next player or the Storyteller (GM) spends a Power Point to take control of the story. Think of Power as Fate points in many other systems but here they are the central motive force driving the story.

The more games you read and play, the more bits that get stuck in your mind. Some things are instantly brilliant and you love them. Others may be good ideas but poorly executed and others just don’t work for you. We could all make a list of game mechanics and everyone’s lists would be different. I would also wager that the same mechanic in one game may be a turn-off but in a different game, the same mechanic works well.

I mention this as in a game that took only a couple of hours to put the core rules together there is very little in here that is completely new if anything. The amusing thing is what I would consider its main influences. At least one grandparent would be Conan: Adventures in an Age Undreamed Of and another would be Zweihander, neither of which I would class a particularly child-friendly.

As to what came from where I will let you decide.