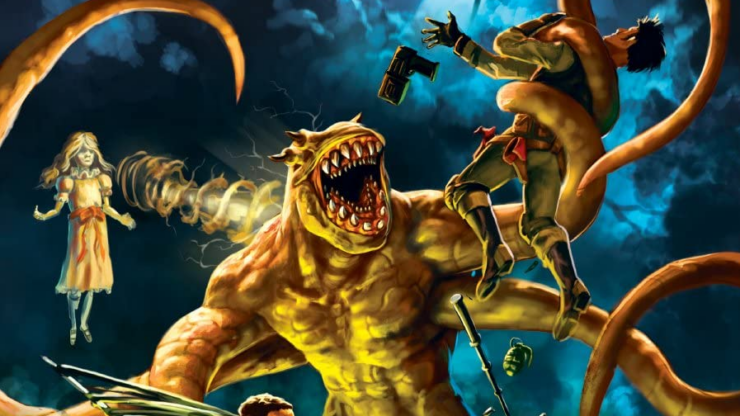 A couple of years back I had the chance to playtest tremulus by Sean Preston. Tremulus is a lovecraftian horror RPG using rules inspired by Apocalypse World. To this day this has been one of the most memorable roleplaying experience. Even though I played with total strangers (aside from Sean) things worked great and we had a total blast. Unfortunately I never had the chance to play another PbtA game since then.

Over the years I purchased several PbtA games which I had a lot of fun reading, but especially the Keeper side of things never really clicked for me. For some reason I had a hard time understanding how one is supposed to run one of these games. Sometimes I had the impression that the various authors just assumed a certain familarity with the system instead of fully explaining everything. Perhaps I subconciously tried to approach PbtA games like the more traditional games I was used to. But PbtA is definitely not D&D.

Many people gave me the advice to either read the original Apocalypse World or the highly popular Dungeon World in order to grok the system. Even though I was pretty excited about DW I wasn’t really too fond of it in the end. Personally I don’t understand why one needs a 300+ paged rulebook in order to emulate gameplay reminiscent of early D&D. But I digress. So DW just didn’t work for me. I also checked out Apocalypse World and wasn’t too excited about it either.

Eventually I stumbled upon Monster of the Week by Michael Sands. This was exactly what I have been looking for. As you may already know I am a huge fan of TV series like Buffy – The Vampire Slayer, Supernatural, X-Files, Fringe which MOTW was inspired by. So things are already off to a great start. What MOTW also sets itself apart from many other roleplaying games is its conversational style of writing. Reading the book felt a lot like Michael Sands sitting next to me, explaning how everything is supposed to work. There are countless examples which helped me to finally understand how the game is meant to be run and played. I actually read the whole thing in a weekend which is very uncommon – for me at least.

I haven’t had the chance to put MOTW to the test yet, but I plan to run a one-shot early next month. This gives me more than enough time to reread all relevant advice and check out some of the available Mysteries. The best choice is probably just to run one of the introductory Mysteries included in the book. I really hope that PbtA games will work for me as a GM. In theory the focus on the narrative elements and the improvisational style should work great for me. I’d also love to shift some of the gamemaster’s responsibilites onto the players which is something PbtA games seem to endorse. I’ve been struggling with the anxiety caused by this responsibility for a while now, and MOTW (or similar games) might help me to get more comfortable with running games again.

Have you had the chance to play or run MOTW? How did it work out for you? Feel free to share your thoughts in the comments below!