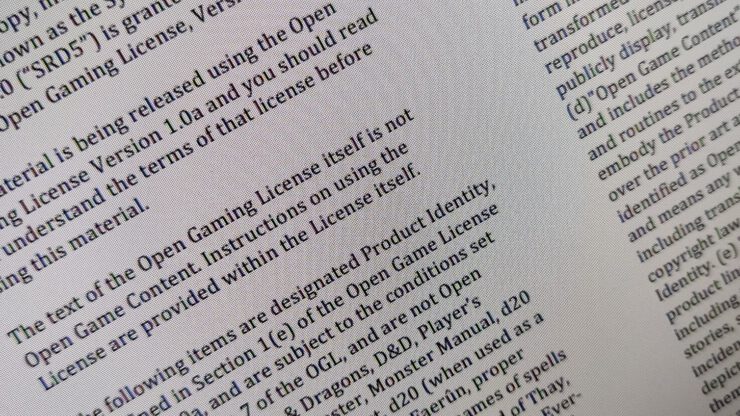 If you haven’t been living under a rock these past few days, you surely have heard about the scandal surrounding the leak of Wizards of the Coast’s OGL 1.1. The Open Game License 1.0a allowed fans and third-party publishers alike to create and sell their own material based on Dungeons & Dragons without having to ask WotC for approval or having to pay royalties. Later other publisher adopted the OGL for their own products. Mongoose Publishing’s Traveller, Evil Hat’s Fate and West End Games OpenD6 all use the OGL. While not actually neccessary to create third-party content under US copyright law, it made things easier for a lot of people. It was a simple and (on the surface) fairly open license which helped to create a D&D boom back when D&D 3.0 first came out.

With the release of D&D 4th Edition WotC tried to get control back. I have to admit I never looked to closely at the GSL but from what I’ve read third-party publisher weren’t happy about the terms under which they were allowed to produce content for 4E. This eventually lead to major publishers turning their back on D&D 4th Edition. Paizo went even so far to create their own fantasy roleplaying game based on D&D 3.5 (with many addition, fixes, and improvements) called Pathfinder which has been quite popular with many fans to this day. It has been rumored that Pathfinder even managed to outsell D&D 4th Edition for a while.

Things changed again with the release of D&D 5th Edition. Instead of sticking to their guns, Wizards of the Coast decided to adopt the OGL again, and we saw a resurgence of the d20 System boom from the 2000s. I wouldn’t be surprised if 5E got even more third-party support than D&D 3 and 3.5 back in the day. Suddenly 5E was everywhere and for the first time during my time as a roleplaying game enthusiast D&D actually entered mainstream. Shows like Stranger Things and the success of Critical Role made more and more people aware of the hobby.

Fast forward to the later half of 2022: Wizards of the Coast announces One D&D. Instead of coming up with a whole new edition their plan is to release an updated version of 5E which will come with its own dedicated VTT based on the Unreal engine. Their playtest documents and the accompanying surveys got mixed responses but overall I was cautiously optimistic. I liked a lot of the changes they introduced to 5E in the recent years which actually led me to offer to run 5E for my friends in 2022.

Then Linda Codega from Gizmodo managed to get their hands on the new OGL 1.1 and revealed WotC’s attempt to get a tighter grip on D&D and squash their competition. I highly recommend you check out their article, if you haven’t done so already. As you can imagine the vast majority of D&D fans active on social media was outraged. The new OGL was all but open. But the worst part is that they actually want to revoke the OGL 1.0a which has been in use for about 20 years. They basically pulled the rug from under all of us. There are many content creators fearing they might lose everything over night. Yesterday two publishers (Kobold Press and MCDM Productions) announced that they work on their own fantasy roleplaying games and plan to release them under an open license. I am sure many others will follow. In a few days, Wizards of the Coast destroyed all the goodwill they garnered since the release of D&D 5th Edition.

It seems the suits at Hasbro and Wizards of the Coast want to turn D&D into a “lifestyle brand”. And the first step is to squash the competition (which includes former partners) and take back control of D&D. They don’t care if this jeopardizes the livelihoods of many dedicated people who helped to make D&D as popular as it is now. From what I’ve read some managers in the company believe that D&D 5th Edition got into this market-dominating position on its own merits, when we all know that there were many contributing factors which included a lot of support for the system by third-party publisher. I am sure 5E would have been successful if they kept it a close system like 4E, but I doubt it would have reached this high level of popularity that quickly, especially since WotC never managed to release enough books to satisfy the fans’ needs.

I have to admit that I actually like 5E a lot. Sure it has its quirks, and it’s definitely not the easiest game to learn, but overall it can be a lot of fun. When compared with D&D 3rd Edition it’s definitely less crunchy but still deep enough to please players who are into optimizing their characters. Some of the changes they planned for One D&D sounded really cool and – as I said – I was cautiously optimistic about the whole thing. Unfortunately the excitement I had for 5E has been totally drained by the OGL leak. It’s hard not to be taken aback when a corporation like Hasbro shows its true face. Their latest move is a power grab, an attempt to curtail competition and force players to only buy their products. The idea is to funnel all the money people used to spend for their hobby into Hasbro’s pockets. If you want to play D&D online, you’ll have to use their VTT for which you will probably have to pay a monthly fee. According to Wizard’s CEO D&D is “undermonetized”, so they’ll try to get everyone to pay for the privilege to play D&D. Currently it’s sufficient for the DM to own the core books. Expect to pay a fee if you want to use certain classes or use certain items on Wizard’s VTT in the future. Basically they want to turn D&D into the tabletop version of these predatory mobile games. The future of D&D looks bleak indeed.

BUT there’s light at the end of the tunnel. The death of an open license for D&D will force many publishers to look for alternatives. In the next few years more and more people will not only focus their attention on D&D, but they’ll come up with their own games or support others with more reasonable licenses attached to them. Hopefully this will be successful and finally break the dominance D&D has held over the TTRPG hobby for so many years. D&D will probably still hold a big (if not the biggest) market share, but the hobby would be better off with more competition and more successful non-corporate game publishers.

Update: I want to apologize to Linda Codega for misgendering them (they use they/them). It was an honest mistake on my part. I changed the post accordingly.