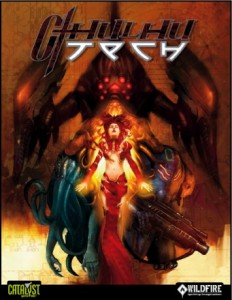 CthulhuTech is a strange marriage of H.P. Lovecraft‘s Cthulhu mythos and japanese big robot anime series. CthulhuTech is also the first RPG by WildFire, a labor of love of just three people who created the game in their spare time. Knowing this makes the end result even more spectacular.

The rulebook is a beautiful 290 pages full-color hardcover book. When I first opened the book I was blown away by the artwork. The second thing I noticed that everything screams “Neon Genesis Evangelion”. And that’s a good thing. But let’s talk about the story of CthulhuTech first.

The game is set into the near future. It’s 2085 and humanity wages war against an ancient alien race, the Migou, who attack from space and against various cults who attack from within. The stars are right and dead gods have awakened and their gaze falls on Earth. The New Earth Goverment (short: NEG) utilizes cybernetic-organic mecha to fight against the alien invaders and the mecha of unspeakabe cults.

If you are a fan of japanese mecha anime and the Mythos, you will at once fall in love with CthulhuTech. The idea behind the setting is very cool, strangely familiar but also something refreshingly new. But I also fear that a lot of the psychological horror that’s part of Lovecraft’s stories will have to be thrown out of the door when you run a CthulhuTech campaign. The player are supposed to play soldiers in the so-called Aeon War and when you’ve dealed several times with strange alien mecha and other forces of the Mythos, you will probably get used to it. So in the end a Migou is just something like an orc in D&D.

But I haven’t had the chance to playtest the game, so perhaps it’s possible to establish a sense of dread common in Mythos stories even when the players’ character stomp around on battlefields across the solar system with huge humanoid warmachines.

The game uses a rules system dubbed Framewerk, that uses ten-sided dice and reminds me of White Wolf’s Storyteller system. There’s some kind of “poker game” built into the task resolution system that favor roll results that are multiples or straights. Like many modern roleplaying game, CthulhuTech doesn’t use classes or levels. There are several character templates that can be used when you don’t want to create characters totally from scratch, but their are meant as mere guidelines. The available templates are: Arcanotechnician (part scientist, part occult magician), Engel Pilot, Intelligence Agent, Mecha Pilot, Occult Scholar, Soldier and Tager (someone who has bonded with a supernatural symbiont).

Players can also choose between two races: humans and nazzadi. The Nazzadi were created by the migou from human DNA to fight humanity but they rebelled against their creators and now fight alongside humans. Did somebody say Zentraedi *cough*?

When you skim through the book you’ll notice that it’s full of background information, flavor text, everything you’ll consider “fluff”. Although you’ll find many things “borrowed” or “inspired” by anime series like Robotech or Neon Genesis Evangelion, the creators of CthulhuTech have created a highly detailed word in its own right. And since the book also contains a lot of NPC stats, vehicle stats, adventure hooks, etc. you can easily run a whole campaign without ever buying an additional sourcebook.

If you like mecha, SF, the Cthulhu Mythos, japanese anime and eldritch horror, you really should check out CthulhuTech. And if you need even more information on the world of the Aeon War, there’s already a CthulhuTech Companion available in stores and another title called Dark Passions is coming out soon.