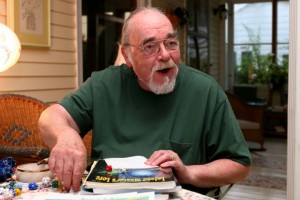 Every now and then a mere player decides he has to rise above his fellow men and become a gamemaster. And trust me, being a GM is not as hard as it sounds. And if you really think that the GM is “better” then the players you really should rethink your decision.

“Games give you a chance to excel, and if you’re playing in good company you don’t even mind if you lose because you had the enjoyment of the company during the course of the game.” (Gary Gygax)

In my opinion everyone at the table is responsible for the fun of the group. It’s neither the players’ job to entertain the GM nor the GM’s job to fight the players. In the perfect game players and GM experience an epic story together and everyone is contributing his part.

So, what do you have to do when you start GMing? At first I would advise you to choose a roleplaying system and setting you know. Especially when you are a newbie GM you shouldn’t try to learn two new trades at a time. Learning to GM is hard enough even when you know the rules and campaign setting by heart. Of course if you and your friends haven’t played a pen & paper RPG before, you’ll be forced to start from scratch.

The decision which system and setting you want to use is of great importance here.  There are a few games that are notably newbie-friendly: Savage Worlds, Warhammer Fantasy Roleplay, Star Wars (Saga Edition or even the old WEG version using the D6 System) and Call of Cthulhu, just to name a few. Savage World is my favorite game on that list, because it’s latest edition, the “Savage World: Explorers’ Edition” is a not too pricey (around 10$) and is easy to learn and play. And you get quite a few interesting adventures for free on the publishers website. The other games are pretty easy to learn too and you don’t need to buy a lot of books to play them. That’s part of why I didn’t include D&D in my list.

After you’ve decided what game you want to run, make sure you read the rules at least once. You don’t have to memorize every single rule, but make sure you have a strong grasp of the basic concepts. If you don’t want to buy a ready-to-play adventure you’ll have to write your own. There are a lot of adventure writing tips out there on the ‘net, so I want go into this topic here.

“The essence of a role-playing game is that it is a group, cooperative experience. There is no winning or losing, but rather the value is in the experience of imagining yourself as a character in whatever genre you’re involved in, whether it’s a fantasy game, the Wild West, secret agents or whatever else. You get to sort of vicariously experience those things.” (Gary Gygax)

Ok, it’s done, you finally sit at the gaming table surrounded by a couple of players looking at you like a pack of wolves stalking their prey. Don’t start to worry! As I’ve told you before roleplaying is not a game of players vs. the GM. And if one (or more) players already know the rules of the game you are about to run, ask them to bear with you. Most experienced players also very supportive to inexperienced GMs, so there should be no trouble.

“The secret we should never let the gamemasters know is that they don’t need any rules.” (Gary Gygax)

While running the game try to focus on the story, the NPCs you play and never on the rules. So you forgot that attacking someone from behind grants a +2 bonus? So what? It’s more important to keep the game running than looking up every rule. And don’t discuss rules during play. If a rule question comes up, just tell the player that you’ll look it up during a short break or after the session. Long discussion of rules will destroy the game’s atmosphere faster than you can utter “Rules laywer”.

Don’t hesitate to use facial expressions, gestures and accents when playing your NPCs. My players will probably never forget that old priest in one of my WFRP campaigns with the hoarse voice and the hacking cough. Too bad I almost lost my voice after that session. My post “Five tips to improve your roleplaying” gives some tips that will help you to make your NPCs much more memorable. And if you as a GM set an example your players will probably loose their inhibitions, too.

With every additional hour that you’ll notice that DMing will get easier and easier. My advice is to practice your improvisation skills as often as possible. You probably know the famous statement that “No battle plan survives contact with the enemy“. It’s the same thing with roleplaying games. Usually your plan on how the events should play out dies as soon as the players make a decision. And instead of forcing them back onto track you should try to improvise. And trust me, even after over a decade of experience, players can still surprise you!

You finally reached the end of your first session. The players are still talking about how they took down the end boss and you can congratulate yourself on a job well done. But wait, there’s still one thing to do. Especially when running a new game I always ask my players how they liked it. What they would like to see in the campaign’s future? If there are some rules they want to discuss and if they were happy with the way I ran the adventure. And in most cases my players gave me some valuable insights that helped me to improve my GM skills.

I hope this post will give you some hints on how to GM you first game. And perhaps even some of the more experienced GMs out there will at least find this article enjoyable to read. As always I would like to read your comments, criticism and questions!