For the last weeks I have been working on a science-fiction campaign setting that I call “Ad Astra!”. I have finally finished writing down the background story and descriptions of the various factions and I want to share a few bits with you. Please let me know what you think. Every comment is appreciated. 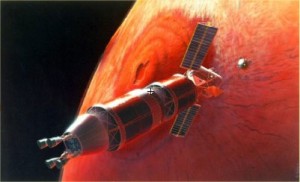 The first manned mission to Mars is a success and a semi-permanent research base is established on Mars. A couple of years later the remains of an alien space ship are found under the surface of the red planet’s desert.

The alien technology salvaged from the derelict ship is far beyond human technology. The leader of the research team calls the unknown aliens Elohim. Nobody knows what happened to them and why they crashed on Mars.

A international research team finally uncovers another alien artifact. A huge Elohim jumpgate orbits the Mars moon Phobos. Using alien technology and human ingenuity the scientist and engineers manage to start the millenia-old gate opening a wormhole to the far away Omega Centauri star cluster. Several probes are sent through the wormhole and return with information about several habitable worlds.

Huge colony ships are sent through the wormhole to establish colonies and research outpost on the other side of the wormhole.

The data crystals found in the Elohim ship indicate that the Elohim have tampered with human genome in order to give them abilities like telekinesis and ESP. Using alien technology it’s possible to identifiy people with a latent ESP ability and awake the dormant gene. This is called the “Prometheus Effect”. Over the coming centuries hundred thousands of people are identified as “espers”.

Among the abilities of espers is the capability to attune to Elohim technology. At the end of the 22nd century millions of humans live in the Halley II colony thousands of lightyears away from home, when suddenly the Elohim jumpgate is destroyed.

For several hundred years the human colonists fight for survival far away from Earth. There are wars, famines, natural disasters, but in the end the former colonists build a new civilization. In memory of the world left behind they call themselves Gaians and their new homeworld Gaia.

On Halley III aka Alexandria they find Elohim ruins and more artifacts that allow them to build their first psitech devices. Psitech devices can either be used to grant some basic esper abilities to ordinary humans or greatly enhance the abilities of a talented esper. This technology leads to the first hyperdrive. But even after extensive research the Gaians scientists are unable to build another jumpgate.

If you like to read more about the world of “Ad Astra” let me know in the comments! Then I will post more details on the factions of the Omega Centauri star cluster. And by the way, when you still remember my “Ad Astra!” posts from a few months earlier, you’ll notice that I changed the backstory a bit. The “we don’t know where we come from” idea was perhaps a bit too much to handle. 😉