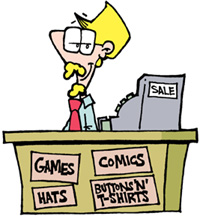 That’s something that interested me for quite some time, where do you buy your roleplaying games, supplement, dice, battlemats etc.?

Back in the day I bought everything at a small game shop in the city center of Gießen. But often I didn’t get the books I was interested in and the guys from the shop seemed unable to order something for me, so I finally started buying from online shops. Today I almost buy my RPG stuff exclusively online. When possible I also try from the publisher directly (if the shipping fees are not outrageously high).

So, where do you you buy your RPG stuff? And please note that you can choose up to two answers:

And if there’s a FLGS or online shop you want to recommend, please let us know in the comments below!