I have a confession to make (another one you say)! As a Game Master I really don’t like pre-published adventures. Don’t get me wrong I know WHY they exist, and I’ve read my share and enjoyed them, but I rarely play them. The reason? Because I enjoy creating the story as much as I do playing it.

The same applies to published campaigns as I’ve said on other posts. These days, with very few exceptions, I play only campaigns I have created. But this wasn’t always so. Before 1993 when I took the conscious decision to do this I tried countless games and started innumerable campaigns.

Whether consciously or not I always rebelled against the game or setting’s metaplot, and I ended up doing just what I say on this post’s title, deconstructing metaplots.

I would like to share with you two instances where I did this and just what I did, or intended to do anyway. This was the time when campaigns were begun and dropped fairly quickly and in both cases the games never played out all the way to the end, but I will tell you what happened in the game and how I had planned it to play out if it had. Hope you enjoy it… 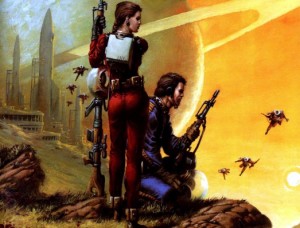 I was still in high school when this game was published, and it instantly became one of my favorite games. Now as an adult I’ve learned of the woes in TSR including the controversies surrounding Lorraine Williams, but back then I was a blissfully unaware teen, excited over the new shinny game! The Buck Rogers XXVc RPG was based on the AD&D 2nd edition rule system adapted to a sci-fi setting. Now it may look dated and clunky, but back them before the OGL and D20 Modern and D20 Future, to me it was pure awesomeness!

I was enthralled and brought the games, the comic modules, the board game and novels. I had my issues with the game; it was a setting based on a Cold War paradigm that soon became outdated. There also seemed to be no rhyme or reason to how characters, or even the gennies (genetically created beings designed to live in different environments or for different purposes) looked in the art, or where described, from one source to another. But my biggest problem was the titular character himself, Buck Rogers!

With such a larger than life central figure, even as a background character, my players resented living in the shadow of a living legend, feeling that no matter what they did, they could never upstage Buck. Mulling over this I came up with the following scenario.

The players all belonged to NEO (the New Earth Organization) rebelling against RAM (no, not that RAM, but instead the Russo-American Mercantile) when they are tasked with a high priority mission. Buck Rogers has arrived at their secret hideout and fallen ill, apparently due to a side effect from the cryogenic sleep that kept him alive for five centuries. With the life of the beloved and inspiring hero on the line, the rookies have to infiltrate a RAM medical research facility and “liberate” the medicine that will save his life.

Against all odds the characters infiltrate the facility, but when they find the medicine they discover a terrible secret. Buck Rogers is a fake! The real Buck Rogers died in his ship when the cryogenic chamber failed. RAM discovered his remains and used his DNA to grow a clone. As expected NEO has embraced Rogers as a symbol, one his RAM handlers will manipulate to their advantage so they can eventually crush NEO once and for all.

This is as far as the players got. I remember the players were excited but don’t know why we never played the game again. I still have my notes for that campaign. The rest of the adventures had to deal with just what the characters intended to do with the information. Who were the secret RAM agents working inside NEO? Would revealing the truth protect the organization or demoralize the Terrans? Was Buck even aware of the reality? I love games with moral quandaries and this was going to be one full of them. My main goal was ultimately for the players to become the true saviors of Earth, and the new inspiration for NEO, not a time lost astronaut, but men and women (and gennies) of the times!

I had another idea for the setting that addressed the Buck Rogers myth issue. In this version of the campaign there would be NO Buck Rogers, instead the player characters would be the team of astronauts that become time lost and are awakened in the 25th century as symbol for the struggle of Earth!

I don’t know if I’ll ever play Buck Rogers XXVc again. If I do it will not be with the original rules. Adapting this to D20 Future or even Savage Worlds would not be hard at all. I have most of the published supplements and some of the novels still. But I don’t know this may be one of those memories better left untarnished by reality.

The other game I deconstructed the metaplot of is one that may not even seem to have that much of a metaplot, RIFTS!

Ok some of you may rightfully point out that Rifts has no overarching metaplot, and I’ll concede you that it may seem that way. Until the books of the Coalition War (which I never read) it might have been argued that nothing changed in Rifts, but I contend there was a metaplot in there, albeit a really slow moving one added to by each additional book published. The history of the Rifts world did not chance much since the publication of the core rulebook until the publication of the Coalition War Machine, the last RIFTS book I purchased.

But back in the early 90s I was still a rabid fan, devouring every sourcebook, and from the mish mash of world books and source books I came up with this ambitious plot to reshape the Rifts world in general and the North American continent in particular. This is how the game started…

The characters come to, mid-battle, in a strange temple; they have no idea where they are except they are in the middle of a firefight. As they fight they begin to see the temple shift around them, just as a dragon burst through the temple doors the whole structure and combatants shifts out of reality and the player characters are caught in a raging waterfall that drags them away. When they regroup they begin to piece together what happened. They are in the magic zone searching for an asteroid that landed nearby. When the full conversion borg runs a diagnostic he finds something odd in a secret smuggling compartment in his chest cavity, a dead d-bee baby!

The group retraces their steps; they were hired by a small kingdom near the magic zone where a seer had visions of a child from the skies coming to save the world. In fact the asteroid they were looking for was actually a ship carrying a d-bee born in a colony in on Mars, the vessel for a benevolent alien intelligence that has come to this reality to bring balance to the world. Yes I know what you are thinking the Jedi Messiah!

The characters had found the baby, but when the attack by the agents of a mysterious power killed the baby, the alien intelligence placed its essence inside one of the player characters. The game would have involved all the different power players in the Rifts world struggling to capture the group and figure out which one was now touched by the entity. At the same time the players would have to discover that the baby was sent to earth so he could find an artifact of great power and take it back to Mars. Hopefully they would have found the artifact and then struggled to find some space worthy ship to leave the planet and reach Mars.

Among all the traditional power players in Rifts one would have had a big twist. Karl Prosek, leader of the Coalition and enemy of everything magic and d-bees would have been possessed by Nostrous Dunscon, the powerful and evil founder of the Federation of Magic, who was not killed by Joseph Prosek, but instead possessed the young human general and built an empire after moving his essence from Joseph to Karl. Nostrous would have been the ultimate villain and he would have manipulated both the Coalition and the magical powers against the players.

By the end of the Campaign the magical estates and the Coalition would have been liberated from the influence of those manipulating them, forged a new alliance against common enemies, and the players would have reached Mars. There the entity would reshape Mars as a new earth and the masses from Earth would travel through the Rifts to this new earth as their old home planet consumed itself in one final conflagration of magic.

I would have loved playing that campaign to the end. Sadly it lasted only for about ten sessions and then petered out. Not because of lack of interest but because we lost about half the group and some of the others had conflicting schedules so we never did finish that game. But I was particularly proud of that one!

Well those are two instances where playing with the metaplots and changing them in a game not only made the game feel like my own, but gave me a chance to surprise my players (or at least try to) and challenge their expectations of the game. And to me that is a great thing!

PS – A non sequitur final comment. I am aware that deconstruction is much more complex that just changing plot elements in a game. So if you are bothered by my appropriation of Derrida’s work for such banal things, I apologize!

Looking for a spiritual home.