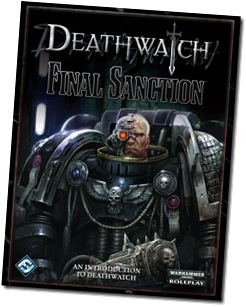 Fantasy Flight Games’ preview adventure to the upcoming Deathwatch roleplaying game is finally available for download at RPGNow. Deatchwatch is another RPG set into the Warhammer 40,000 universe. This time players adopt the roles of mighty Space Marines, member of a Deathwatch Kill-Team. These teams consists of Space Marines from different chapters who work together to fight as the forefront of Mankind’s war for survival against xenos, heretics and demons.

The free PDF consists of 40 lavishly illustrated pages and contains not only the basic rules you need to play, but also 4 pre-generated characters (a Dark Angels assault marine, a Blood Angel devastator marine, a Space Wolves tactical marine and an apothecary from the Ultramarines chapter) and an introductory adventure.

Because of their supernatural strength and toughness Space Marines are capable of overcoming hordes of enemies. Deathwatch introduces special hordes rules with allows GMs to treat hordes of enemies like one vast creature, which vastly simplifies combat.

Another new concept in Deathwatch will be Demeanours. Demeanours are special traits linked to the various Chapters and are meant to highlight what makes each Chapter unique. The Ultramarines apothecary for example has the Favoured Son demeanor which allows him to reroll Fellowship Test when dealing with either Space Marines or members of the Imperial armed forces.

I have avoided reading the adventure in the end, since I don’t want to spoil myself in the case I get to play it in the future. But I am sure it’s of the same high quality as the rest of this booklet.

I am sure fans of the Warhammer 40,000 universe have eagerly awaited Deathwatch and will probably be very happy with this free preview adventure. When I am not totally mistaken Deathwatch should make its debut at GenCon, so I’ll make sure I pick up a copy there!

UPDATE: It seems the PDF has been removed from RPGNow. I have no idea why that happened, but the PDF is now available from the official site as well.