Frank Herbert’s Dune is one of my favorite SF books. I’ve read several of the sequels but in my opinion the first book was the best. My father owned a hardcover version of the book that had the painting of a sandworm on its cover. From the first moment I saw this cover I was intrigued. Since then I have read the first novel several times. I also enjoyed Dune Messiah to an extent, but IMHO the story started to get a bit too weird for my taste starting with Leto’s transformation in Children of Dune. 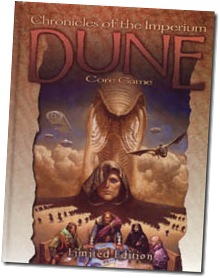 But it seems although Dune and its sequels (and prequels) are very popular, transferring the story to other media almost always failed. The David Lynch movie was very ambitious but was not really close to the novel. Especially the Dune computer games by Westwood Games were big hits, but they were only loosely based on the story of the book, too, and only focused on war on Arrakis. There was even a pen & paper RPG set into the Dune universe called Dune: Chronicles of the Imperium by Last Unicorn Games. But alas the game was doomed from the very beginning. In 2000 a limited edition of just 3000 copies was sold at GenCon before the company was acquired by WotC. I am not sure if Wizards was just not interested in the franchise or if there were some license problems, but the game was eventually cancelled.

So, what can a Dune fan like me do, if he wants to run a campaign in the Dune universe? You can of course try to get a copy of LUG’s Dune game on eBay, if you are really willing to pay several hundred bucks for this very rare book. That’s even too much for a game collector like me. Aside from that you can search the internet for some fan-created games. I’ve found the following games while researching for this post:

There are probably dozens of other conversions floating around on the ‘net. If you know of any other Dune RPG written by fans, feel free to post the links in the comments below.

I think if I had to run a Dune campaign any time soon, I would just use a game system like PDQ# and be done with it. Why exactly PDQ#? Although Dune is not really part of the swashbuckling genre PDQ# was created for, IMHO PDQ# can be easily adapted to almost any genre. For example I used a mixture of PDQ and PDQ# to run my Ad Astra campaign some time ago. PDQ# is very easy to run and is extremely flexible as a system. Since Dune has a strong focus on melee combat, detailed rules about firearms are not really necessary. If you ask me, Dune is more about politics, intrigue and philosophy than combat anyway. And a narrative game like PDQ# handles this type of campaign probably better than more crunchy systems. Your mileage may vary, of course.

What do you think? Would you like to roleplay in the Dune universe?