There’s the easy way to handle travel in your game and that’s just skipping it: “After four days of eventless travel you reach your destination.” Alas this is not very interesting. Don’t get me wrong, you don’t need to fully flesh out the travel portions of your game all the time. But sometimes an exciting travel can help to set the mood for a campaign or give the GM the opportunity to slow things down a bit.

I remember a D&D campaign I played in a few years ago. Our party was sent to a neighboring kingdom to witness an announcement the kings intended to make to the world.  So we packed our things and started to travel. But instead of just telling us that we arrived after a few weeks of travel, the GM used the journey to set the mood for things to come. We travelled through a bleak countryside, slaves and serfs were hard-working on the fields. During our travel to the king’s castle we experienced first-hand the cruelty of the local rulers. Because we were ordered not to interfere with local politics we couldn’t intervene. The GM showed us in several encounters on the road what was wrong with this country. We made a lot of experiences we wouldn’t have made if he just skipped the travel. When we then reached the huge and extremely impressive king’s palace (think of Versaille) with extensive gardens the contrast couldn’t have be more extreme.

Travel is also a great opportunity to show the players that the world around them is a living breathing world. In a lot of games the action is totally centered on the players. Nothing happens without the players setting it into motion first. This gets old pretty fast. Especially in fantasy games travel times can get extremely long. While the party is underway, wars can start, alliances can be forged, kings have died (or have been assassinated) and so on. And you can pick up a lot of rumors on the road. Let the characters meet friendly people who share a meal and the country’s latest rumors. Sometimes a travel encounter can lead to a whole adventure on its own.

In my post about “Wars in your campaign”, I gave some examples on how you can use a war as a backdrop for your campaign. And when you are not directly at the front lines you sometimes don’t even notice that there’s a war. But when the party is on the road it meets soldiers, mercenaries, refugees, perhaps some desperate deserters on the run. There are a lot of opportunities for exciting encounters here.

If you travel by sea, storms, sea monsters and the inevitable pirate attack can help spice things up. But as with the other encounters, don’t overdo it. Nothing gets more tedious than a pirate attack on every ship travel. Your players will start to get bored if you use the same encounters all the time. Sometimes just skipping the journey is a viable option after all.

An important part of travel is preparation. The characters have to buy trail rations, equipment they might need to cross mountains or rivers, travel cloths, perhaps horses or pack animals and some tents. Even travel preparations can be a good opportunity for the players to train their roleplaying skills. Let them haggle with merchants, discuss with each other about the best route to take. Especially when the travel will be an important part of the campaign (imagine the travel of the fellowship from Rivendell to Mordor from the Lord of the Rings), you should make sure that the preparation doesn’t fall short.

Most of what I’ve written so far applies mostly to fantasy campaigns. In modern times, travel is faster and less dangerous. In sci-fi games not even the sky is the limit. But there are other opportunities for interesting travel encounters you should not forget. In a game of Shadowrun a trip to the subway station may be an adventure in itself.

Or think about space travel. Space is dark, vast and extremely hazardous to human life. So why should travel in space be reduced to a few sentences? Of course, you shouldn’t overdo things, but some encounters along the way, may make things more interesting. Especially when it’s a near-future campaign a meteor storm or solar flare may put the players in real danger.

The message is clear: spice up tedious travel sequences with encounters to make them exciting and to give you – the GM – the opportunity to fill the world around the players with live. You can learn a lot about a country just by travelling through it. 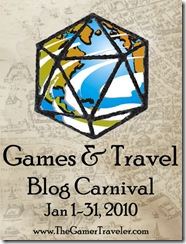 In the introduction I mentioned that travel can be a way for the GM to slow down things. Doesn’t that contradict with the notion of making travel exciting? No. What I meant was that certain parts of an adventure can be hard work for a GM, but I always found that travels gave me the opportunity to stall the game a bit without boring the players. Imagine you haven’t prepared the next part of your campaign as good as you should have. Send the party on a travel, let them have some encounters, improvise the heck out of it and you get another chance at preparing the next step of the campaign properly.

This post is my first contribution to this month’s blog carnival about “Games & Travel” hosted by The Game Traveler. I currently planning to write an article on gamers travelling, but I am not sure when I will be able to post it, so stay tuned!
What are your thoughts on travel in games? Do you usually just skip travel sequences or do you fill travel with encounters? What’s more important to you – the travel or the destination?