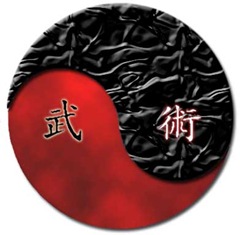 Wushu Open is a short, free and rules-lite roleplaying game created with the Wuxia genre of fiction in mind, although it can be used in any genre. Wushu’s author Daniel Bayn also offers two expanded versions of the game: Wire-Fu and Pulp-Fu (Affiliate links). Both books are about 40 pages long and help players and GMs to experience adventures in the Wuxia and Pulp genres respectively. I haven’t checked out those books yet, so this review focuses on the Wushu Open rules.

What sets Wushu apart from traditional roleplaying games is that the narrative control is almost completely in the control of the player. If a player says that he jumps over the counter, while picking up a gun while in mid-air, shoots the bad guy in such a way, that he is thrown back through a window, that’s exactly how it happens. Wushu encourages players to carry out multiple actions by adding dice to your pool every time you add another action to your description. Of course the other players and the GM have the right to veto.

Task resolution is doing by rolling the dice pool and counting all successes. Every die that rolls above a given number is considered a failure. Usually this number is 2 or the rank of one of the character’s Traits. Traits are something that sets your character apart, like his job, or an adjective that describes him. Each character usually can distribute 5 to 8 points between his Traits. All characters also have a Weakness that has a Trait rating of 1.

In combat you split the dice pool into Yang dice (offensive) and Yin dice (defensive). Successful Yang dice damage your opponents and successful Yin dice are used to soak damage. In Wushu you’re down if even one Yang die gets through! Players and important NPCs get 3 points of Chi which can be paid to negate Yang successes.

These combat rules are only used in fights against important NPCs like Nemeses. When the player characters fight mooks, the GM rolls no dice but the Threat Rating of the whole group of mooks becomes relevant. The players reduce the Threat rating by successful Yang dice. When the Threat rating has been reduced to zero, the mooks are either dead or fleeing. But as long as the rating is one or above, the group causes at one hit against each player.

I think I forgot to mention that the result of the rolls doesn’t change the outcome of the action. The players always have narrative control over what happens, but the dice decide how much the characters’ actions advance the scene.

There are some special rules for situations where you don’t want lengthy descriptions for task resolution and the booklet concludes with tips for veteran roleplayers (which probably have a hard time swallowing a few of Wushu’s concepts) and character creation.

Overall Wushu Open looks like a pretty cool game, especially if you prefer a narrative gaming style over realistic rules and tactical combat. Personally I am not really comfortable with giving the players narrative control, but I think I’ll have to try it out first. I don’t think Wushu can successfully be used for long campaigns, but it’s probably a blast if you’re looking for an easy-to-learn pick-up game.

You can download the free Wushu rules as a Microsoft Word document from the official site. You probably should also check out Daniel Bayn’s column on RPGnet called “Wushuu Skidoo”.