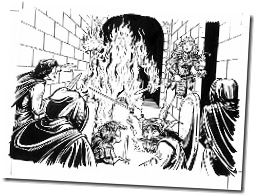 Just this morning I had a chat with Alex Schröder, who is organizing this year’s One Page Dungeon Contest. He reminded me that the submission deadline is March 1st, 0:00 GMT. So, if you are interested in submitting something, you should make sure your are done before that!

Make sure you check out all the details at Alex’ site. And as with last years there will be great prizes for the winners. So, what are you waiting for? Create a one page dungeon and send it in!